Bournemouth University hosted the South Coast Academic Regional Network (SCARN). SCARN enables PGCert leaders from various Universities around the region to discuss Education practice  and collaborate for conference and writing opportunities. SCARN meets 2-3 times a year and this event was hosted by Dr Curie Scott from CEL on Monday 18th March 2019. SCARN members were joined by colleagues from the university.

The focus of the day was to experience and discuss the use of augmented reality (AR) and virtual reality (VR) in education. 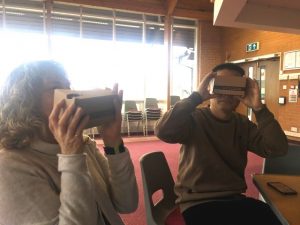 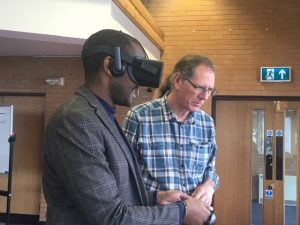 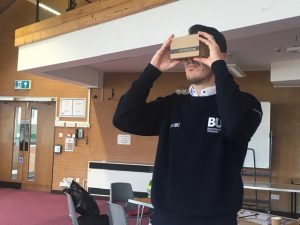 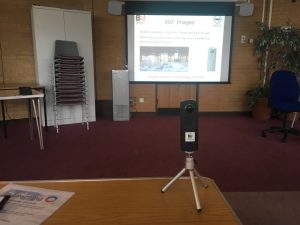 This consisted of an overview presentation by Dave Hunt, Learning Technologist and Heidi Singleton, Post Graduate Researcher, from CEL. The presentation included many opportunities to get ‘hands-on’ with AR, via the Zappar and HP Reveal apps, and VR using Google Cardboard headsets, Oculus Go head mounted display (HMD) and physical interaction in VR using an Oculus Rift with haptic hand devices.

Attendees were also given the opportunity to explore the use of 360º images and video using a Theta 360º camera as well as the Cardboard Camera app for smartphones.

This was followed by a demonstration of how virtual worlds can be used for developing immersive training environments. For example, Professor Liz Falconer developed virtual Avebury, a taster is through this link and Liz reported early research findings from virtual Avebury previously.

Heidi Singleton is developing an immersive deteriorating patient environment for use with second year nursing students at BU.  She is conducting a randomized controlled trial (as part of her PhD) to compare virtual reality training with a similar paper case study.  Initial findings show that using the virtual reality trainer students scored an average of 2.5 more points in their post test quiz when compared to those who used the paper version.  Students have found the simulator to be more engaging than traditional methods and it has been received particularity well by students who have additional learning needs including dyslexia.  Heidi is currently analyzing focus group data and looking for relationships between the different contextual mechanisms (using SMART-PLS software) that come in to play when students use these technologies in a lecture theater setting.  She hopes her study will help to shed light on how these innovative technologies can be used to benefit students here at BU in the near future in a scalable and cost effective way.  See more about the diabetes environment here

Denyse King presented her work in absentia via a narrated walk through of an immersive mixed reality environment which is part of her doctoral work. We looked at the pilot of urinalysis situation (the process of taking a urine sample) where students, as avatars, interact with a ‘bot’ patient who can be programmed to exhibit various emotional states.

The morning concluded with a discussion and exchange of ideas about the potential uses and the benefits and possible pitfalls of using AR and VR in the educational environment.

Here are some other helpful materials

This is an exciting venture for Education. To discuss VR and AR further for future projects please contact Dave Hunt, Heidi Singleton or Curie Scott