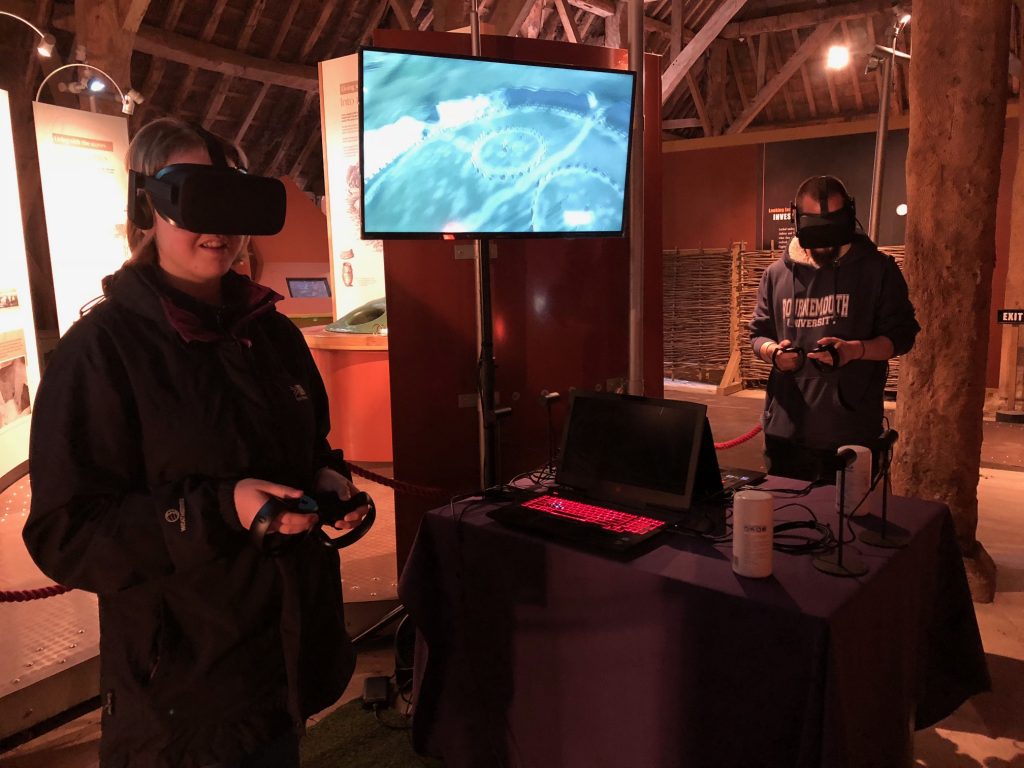 Figure 1 – Two participants at The Barn Gallery in Avebury

The public engagement phase of the Virtual Avebury project, funded by AHRC and EPSRC, has now finished; more than 1,000 people have experienced the fully immersive opportunity to walk (and fly!) around Avebury as it may have looked circa 2,300 BCE. More than 700 people had the experience at Avebury between June – September, and another 400 or so people took part at the BU Festival of Learning in June and BFX in October. So, we’re now into the data analysis phase. I love this bit! Especially when unexpected findings start to emerge, that challenge some of our preconceptions about people.

Four hundred and ninety-six people undertook our post-experience questionnaire at Avebury which, after data cleaning, has yielded 388 full responses. This gives us an approximately 50% sample of all Avebury participants. We also have observation data of all participants at all venues; participants were always assisted and observed by at least one of the research team of Neil Slawson, Prof Kate Welham, our student researcher Josie Hagan and myself. We have a lot of data to analyse, but the first-level counting and cross-tabulating of the questionnaire data is already showing us some interesting findings.

At the start of the questionnaire we asked participants a set of demographic questions about their age, gender and nationality, and about their frequency of use of IT devices, how frequently they play computer games and how immersed they tend to become in films, books and TV. We are interested to see if there are associations between any of these variables and a set of subsequent questions relating to their experiences of, and reactions to, Virtual Avebury. We have started by looking at the age and gender responses, and then at how those age/gender groups responded to the questions about IT usage and playing computer games.

You can see from Figure 2 below that most of our participants were aged over 45. This is not a surprising result, considering that the first two filters for our population were 1) coming to visit Avebury, and 2) deciding to visit the Barn Gallery museum during their visit. Statistics from DCMS and heritage organisations such as National Trust and English Heritage, show that visitors to historic sites tend to be ‘middle aged and middle class’, although this is a significant generalisation – and not an argument I have space to get into here!. 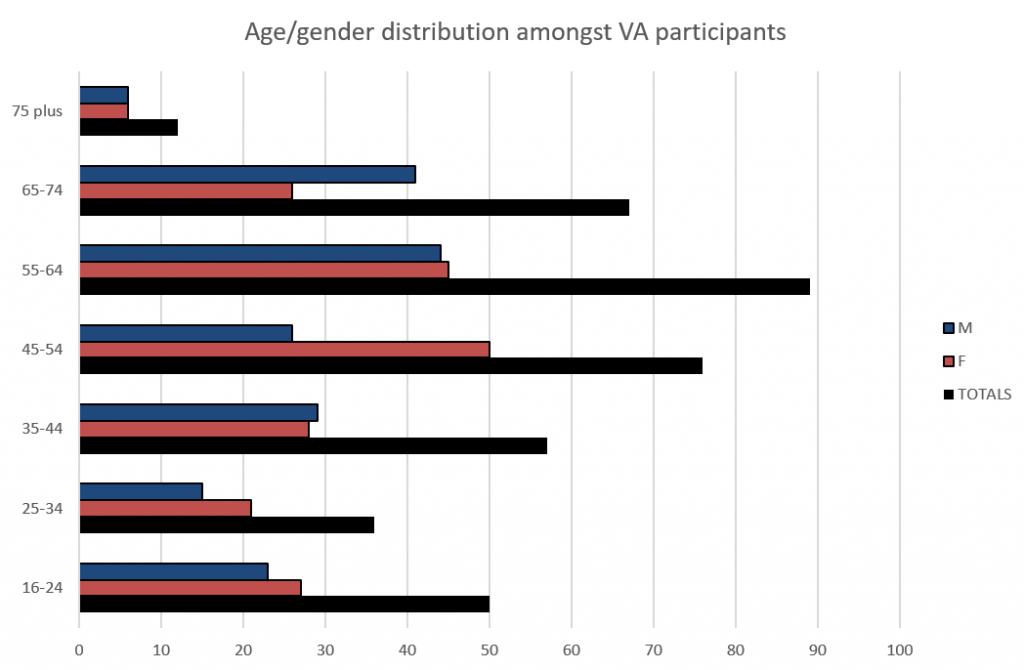 However, one phenomenon that we did observe was that older women, particularly when visiting with partners and grandchildren during the summer, tended to be reluctant to try Virtual Avebury, preferring to leave it to “grandad and the kids”. This observation is corroborated by the questionnaire results shown in Figure 2, which demonstrates that the gender split in the 65-74 age group was 60% male 40% female.  You’ll also notice from Figure 2 that twice as many females than males participated in the 45-54 age group, but this was due to males being under-represented as visitors in this age group, rather than any observed reluctance to participate in Virtual Avebury.

We wondered what factors might be associated with older women being more reluctant to try a VR experience like Virtual Avebury, so we looked at a) the responses to questions on the frequency of use of IT devices (smartphone, tablet, laptop, desktop, games console or any form of VR equipment) and b) how frequently participants played computer games. And the findings surprised us!

Frequency of IT use Figure 3 above shows the average frequency of use of all devices, by age group. You can see that frequency of use appears to reduce with increasing age, and indeed, this data returns Pearson correlation coefficients (r) of -0.84 for females and -0.88 for males, demonstrating a strong negative correlation between age and frequency of IT use for both genders. This doesn’t mean that frequency of use reduces a great deal – from the graph it’s apparent that it doesn’t up to age 75 –  simply that as age goes up, frequency of use goes down. Males overall reported greater frequency of use, but this did vary across age groups. Whilst the difference between males and females in the 65-74 age group is clear, it isn’t unusually large compared to the other age groups. So perhaps it was unfamiliarity with playing computer games that was associated with older females’ reluctance to participate?

Not so! The graph at Figure 4 shows the averaged responses to the question “Approximately how often do you play games using information technologies? These include console games, PC games, tablet (e.g. Candy Crush Saga) and mobile phone games”. Answers could be ‘daily’, ‘weekly’, ‘monthly’, ‘<10 times per year’ or ‘never’. These responses were number coded and then averaged for males and females in each age group. 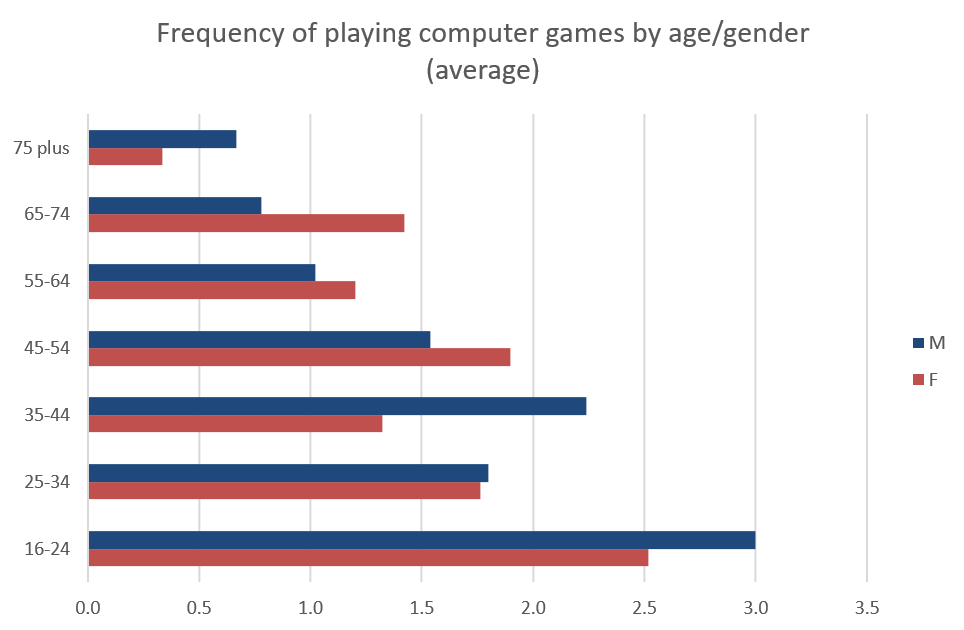 There are probably no surprises that males in the 16-24 age group reported the highest frequency of playing computer games, but there are other trends in this graph that might not be as expected. First of all, people of all ages played computer games. And, whilst overall the frequency of game playing did reduce with age amongst our participants, the frequency differences between males and females in the age groups were not consistent. Also, there appears to be a pivot point at the age of 45. Below this age, males reported more frequent game-playing.  Above this age, females reported more frequent game playing (it should be noted that the 75 plus age group had only 12 participants and so we are less confident about the findings in that group). For instance, females in the 45-54 age group reported greater frequency of game-playing than 25-34 year-old males or females. And most surprising to us of all, the age group that demonstrated the greatest frequency of female game playing compared to males in the same age group was the 65-74 year-olds! We are looking at the data relating to each type of IT device too, and it appears that there are some interesting differences in preferred devices between different age groups and males and females – an important issue for us when considering how we might make access to Virtual Avebury possible for a range of devices in the future.

So, what does all this mean? Well, we’re in the early stages of analysis so we have a lot more work to do, some of which might show us different associations in the data that shine more light on this. We wait to see! But it does suggest that we have to be careful not to explain differences we may see in responses to experiences like Virtual Avebury by referring to stereotypical expectations. And, more widely, expecting young people to be much more familiar with information technologies than older people may be a view we need to challenge.

Virtual Avebury will be one of the VR experiences (also see Heidi’s wonderful diabetes simulation) available for anyone to try at the Macmillan Cake and Collaboration event we’re holding in CEL on Monday 29th October in the Staff Zone at the Talbot Campus. Come along and buy some cake for an excellent cause, and eat it while you take a stroll around an ancient prehistoric monument 4,300 years ago!