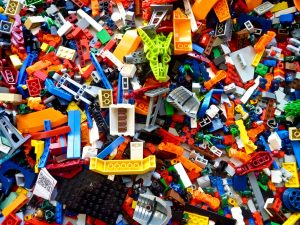 The Centre for Excellence is committed to inspiring creative approaches to learning and teaching.

We were delighted to host Professor Alison Smith (Professor of Learning and Teaching at the University of Winchester) who facilitated two sessions . Here is a summary of the two workshops from Alison:

Focussing on the futures at a time when it is politically hard to fathom the next few days might seem a bit of a challenge. However, we gave it our best shot and stepped creatively outside more immediate preoccupations in two recent workshops on Futures Thinking. One was for the PG Cert Education Practice and the other an open opportunity for staff; both were on imagining the university of the future. In our first group we slanted our considerations towards issues of curriculum design (what might this look like in such a university?) while the second had a broader focus.

As a way of gathering our ideas in a visual map each group to joined in a Silent Discussion. This approach is based on the Chalk Talk activity, created by Hilton Smith and discussed in this paper by Stephen Brookfield). In a Silent Discussion participants gather together themselves in response to a question or topic, and mesh their thoughts visually on a board or flipchart paper.

In a Silent Discussion you need enough space to be able to cluster around the board, and to step back and forth from it as you think and write; not just scribble something and retreat to a distant seat. The question sits in the middle of the board and the group is invited to silently annotate the paper with their opinions. Importantly, it is not about a monologue, but about connecting to the comments of others with responses, views, comments, arrows and wavy lines or drawing. What takes place is a simple dance in and out of the space with writers advancing and retreating as they are inspired by the words of their fellow participants. While colleagues were dancing and writing, Curie and I both added our own squiggles and also distributed bags of LEGO on tables round the room. 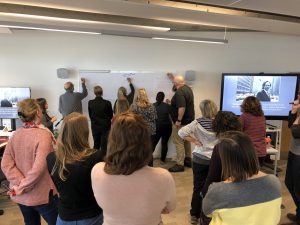 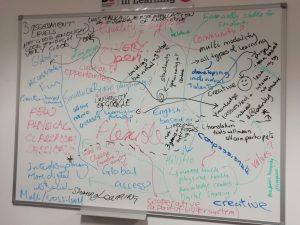 The time to stop is after a given period (5-10 minutes), if there is nowhere left to write, or when the discussion flags. Then everyone takes a moment to step back and consider the tangle of ideas that has emerged. Then you can all consider what is actually there; what messages stand out, where there are synergies, connections, or gaps, and what needs further exploring. Once we had ruminated on our writings, I asked participants to pick one topic and to build it in LEGO. Allowing a short time to build (8-10 minutes) means that people respond more instinctively rather than planning everything out in advance. This is often revealing of what they feel about the issue rather than what they think they need to build or express. Inspired by LEGO Serious Play principles, models are often abstractions of qualities, needs, desirable aspects and aspirations, as well as the real and practical. Even though there was a subtle difference in the topic to be built between the two groups the facets that people concentrated on were still strikingly different. 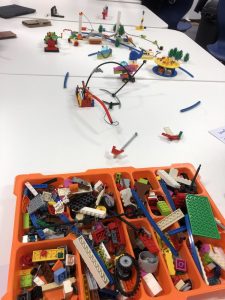 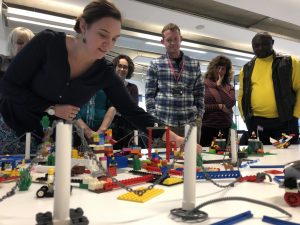 There were a few repeat motifs across the two groups, transferability of study and learning, changing types and use of spaces, greater flexibility and – delightfully – the finding of metaphorical treasure. Some of the themes from each group were also revealing; sustainability, openness, equity, movement, renaissance, inter-generational learning, dispersal and also destruction and chaos emerged from the workshop with PGCert students. The last of these was important for its Janus-like aspects – one, the destruction perhaps of the shape of the university in its present form, but also recognition that learning is not neat and linear but often an explosion of ideas and stimuli entangled in ways of knowing. The importance of different perspectives and the feeling that students will dictate the tune in future were also voiced. Something which was developed in afternoon session (open to staff) was the sense that communities would spring up and develop themselves. This would be aided by the fact that our structures (including fees) would all change, the ‘chains would come off’, our present systems would no longer make sense and that there would be different routes into the university and multiple levels and directions that learning would infuse and follow. All of these themes and ideas took shape in our landscape of the University, as we brought these different models together and turned them into a single creation. Once we had done this we reflected on priorities, questions and challenges and narrated the story of this future place.

Now, having read this you might be thinking ‘Really? What a mess!’ and in a small way you would be right. This was not a logical creation with recognised functions, roles, buildings and systems but rather a visceral reaction to a place we cannot conjure in a crystal ball. Parts of it feel distant and unknowable, while others feel like they are already here. We are feeling our way towards them starting to imagine despite uncertainty and confusion.

The Silent Discussion and LEGO building both gave us a different base from which to approach our thinking and a jumble of themes which can all be unpicked and rethreaded in more traditional discussions, innovations such as new technological practices, and emerging academic literature and speculation. In an hour and a half you cannot change the world, but you can make a tiny shift in how you might think about it. 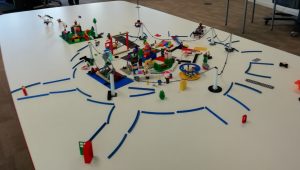 For further examples of how lego has been used have a look at: