The Origami in Science, Mathematics and Education (7OSME) 7th International Meeting occurred recently in Oxford. The conference started with a visit to The Satellite Applications Catapult at Harwell. They work with organisations to make use of, and benefit from, satellite technologies. Michael Loweth from ‘Oxford Space systems’ are one of the companies there. They develop deployable space antennas, booms and panels using origami to produce products which are lighter less complex and more stowage efficient to send into space.

The lead conference organiser, Professor Zhong You, opened the conference. His specific area of research is about origami structures and materials and he shared the invention of an origami stent. Many of the presentations were linked to engineering, design and maths. The full programme and abstracts can be downloaded here at http://osme.info/7osme/program.html 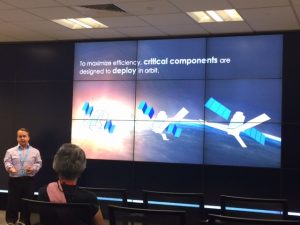 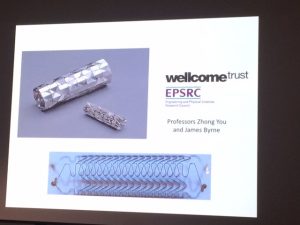 There were two keynotes.

Sergio Pellegrino is the Joyce and Kent Kresa Professor of Aeronautics and Civil Engineering at the California Institute of Technology, JPL Senior Research Scientist and co-director of the Space Solar Power Project. He discussed the complexities of transferring folding principles from paper to carbon fibre for future space telescopes, spacecraft antennas, and space-based solar power systems. Issues include differences in structural composition of material flatness, thickness and stiffness which all impact how sheets of carbon fibre are joined, reducing damage from folding and unfolding as well as smooth deployment. Further information and videos are on https://www.spacesolar.caltech.edu

Tadashi Tokieda, professor of mathematics at Stanford University, presented maths in a mesmerising way. He performed a ‘magic show’ projecting live folding and cutting of Möbius strips to create a square, hearts and rings *PHOTO* (apparently this was his marriage proposal). He is fascinated by origami’s intrinsic and extrinsic geometry. His effusive joy of real-world surprises through mathematical physics problems came through brilliantly! He is active in inventing, collecting, and studying mathematical toys. You can create these by following videos hosted by the Mathematical Sciences Research Institute here 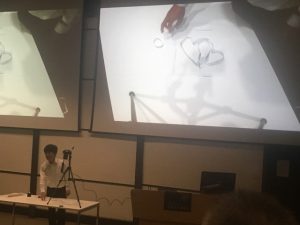 Established crease patterns and tessellations such as the Momotani brick wall, Yoshimura folding and Miura-ori patterns were exhibited in different materials across disciplines. Examples included origami in fabric, fibreglass, carbon fibre as well as paper. Displays alongside academic posters included folded lamps, models to teach fractions, a changing seating arrangement and even a bulletproof shield. 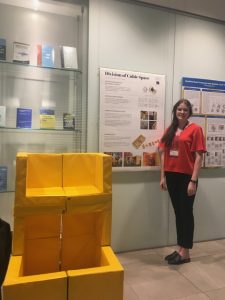 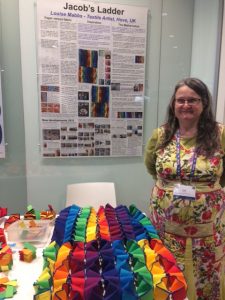 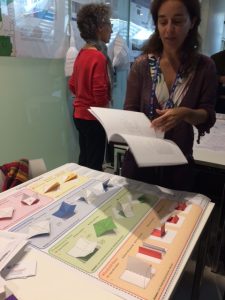 I was intrigued by Alun Kirby, a scientist-artist working with the philosophy of memory to create camera-less photographs. For his ‘metamorphograms’ he creates simple origami tatos (traditional envelopes) using cyanotype tissue paper. This iron laden ink is exposed to light for several days, unfolded and washed. The resultant pattern holds the memory of the folds in layers of ink. This can be transposed to cultural memory, as each person exposed to different experiences leave a trace in different ways, just as the paper does

Joseph Choma develops foldable composites for architectural applications. For example, using accordion folds in fibreglass into collapsible structures which are layered with resins that can harden the end product.

The panel I was chairing was rather busy and we had three presenters from different disciplines. 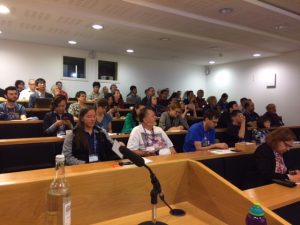 Mark Bolitho is an origami artist and runs Crease Lightning. Mark critiqued his own origami artistic practice considering “When is a model finished?” This has relevance to every maker such as artists, designers and creators in many disciplines. The completion of a product relies on a concluding point in the creative’s journey. For any maker it is the artist’s choice when a model is ‘finished’. This may be a point where they decide they have created the ‘right’ form for an exhibition or when the product responds in the best possible way for a client’s brief. Mark works with an intuitive sense of when a model is finished. Intriguingly, he critiqued Birkhoff’s assertions of two key aesthetic measure (M) of order (O) and complexity (C) where M = O / C.

Eckhard Hennig, Professor of digital and integrated circuit design at Reutlingen University, does origami as a hobby. He now uses origami exercises to teach students various theoretical and practical aspects of engineering. He has developed a new modular origami construction system with excellent load bearing capacity. He brought a bridge as an example and has generously shared diagrams for the nine units for you to create https://www.flickr.com/photos/eckhard_hennig/sets/72157663656782747/ Nicholas Orndorff presented his first boat build as an example of curved folding. He discussed the benefit of developable surfaces. 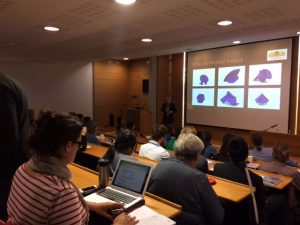 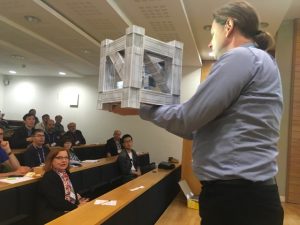 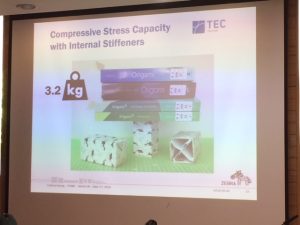 Another fascinating session was by Miri Golan who presented ‘Origametria’ (using orgami to teach maths). This is an established programme and the team have developed an e-learning package at www.origametria.com. Lesson plans focus on geometry principles rather than creating a particular origami model. Each lesson is animated so no origami skill is necessary alongside prompt questions for the teacher to utilise that keep the discussions of geometry open. The attitudes of maths teachers was the research focus and they all commended the benefits of the programme.

The event finished with two keynotes. Emma Frigerio is central to OSME and presented her life journey with origami. She developed and taught origami workshops to teach and explain mathematics for teacher training programs at two universities in Milano (Italy). Tomohiro Tachi, associate professor in Graphic and Computer Sciences (University of Tokyo) has research interests in origami, structural morphology, computational design, and digital fabrication. He designs three-dimensional and kinematic origami through computation and developed origami software tools including “rigid origami simulator”, “origamizer”, and “freeform origami”, which are available from his website here*

It was a pleasure to be with others who are enthusiastic about origami. I use origami for reflective practice and look forward to sharing this with you over the coming months.