The head who transformed a small Scottish school has a new job description: to counter rote learning with play 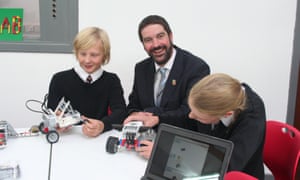 Ollie Bray: ‘Learning through play is widely accepted in the early years and my job will be to find ways of incorporating it into the curriculum for older children.’

When Ollie Bray arrived as headteacher of a 450-pupil secondary school in the Scottish Highlands five years ago, it was in need of improvement with below-average pupil attainment. He threw out the curriculum in favour of “joyful”, project-based learning, and today the pupils’ mastery of technology and problem solving attracts visitors from around the world, including tech powerhouses such as Google and Intel.

Now Bray, 40, is moving on from Kingussie High School to a bigger stage: his success has brought him to the attention of Lego, the Danish toy company, which has appointed him to explore ways of establishing play-based learning in schools worldwide. As the director of global initiatives to connect play and education, he will join the Lego Foundation, the company’s education arm, with a brief to counter “an outdated emphasis on standardised testing and rote learning”, which Lego says equips children for the world of yesterday, not today.

“Learning through play is widely accepted in the early years and my job will be to find ways of extending it by incorporating it into the curriculum for older children,” he says. “A result of this loss of playfulness is the teacher who gives a lesson on the first day of the new school year and then every September for the next 30 or 40 years. The ability to develop key skills of initiative, ability to work with others, problem-solve and keep up with digital advances is being stripped out, and yet when young people are squeezed out of education this is just what employers are looking for,” he says.

Last year the University of Cambridge advertised for its first professor of play, funded by Lego. The successful applicant, Paul Ramchnadani, who comes from a background focused on child and adolescent mental health, is looking at the use of play to support education and promote wellbeing and self-control.

Play is not just about having fun, Bray says: “The word ‘fun’ is really, really dangerous in education. There’s a difference between enjoyment and fun. You can have fun that’s not particularly purposeful. But joy is a deep feeling, which gives you that long-lasting buzz because it feels important. The curriculum has to be relevant to the students’ lives. It’s important that they identify the problem and want to find ways of solving it.”

The Lego company started with wooden toys in the 1930s and launched the present plastic brick in the 1950s. Now, 21st-century technology is central to Bray’s vision of learning through play. “One of the first things I did when I came [to Kingussie] was to secure the funding to give every pupil a laptop they could take home as well. We have embedded technology across the school, from real-time feedback from teachers and personalised learning to collaborative projects and links with parents,” he says.

Team-working, for example, is not a few pupils sitting around a table but is done across desks and between rooms and parts of the school by students using chat and Skype and shared platforms.

“But what surprises companies such as Google when they visit is the way the children take the technology for granted and are not particularly interested in talking about it. They are focusing on real-life, local problems and projects on our doorstep, with our neighbours such as the Highland Wildlife Park and the Folk Museum. We are not developing a nation of super geeks!”

“I’m convinced [that] in some schools problem solving is tokenistic,” Bray says. “Actually, the best type of problems lead to other problems or, even better, you’re trying to work together to find the problems in the first place.”

Personal development of the head and staff are also important for the playful curriculum, with one teacher, for example, spending four days on a course run by the European Space Agency.

“You have to invest time in yourself. I don’t think heads do that enough,” Bray says. “It’s the first thing to go and that’s why people get stressed out. It’s fine not to be in school. The school will run without you. You’ve got to take time out to think about strategy, so you have a clear direction of where you’re going, That makes you more optimistic about the future.”