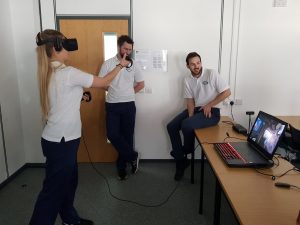 Yesterday physio students at BU had great hands on learning using a variety of VR and AR technologies.

They were fine tuning ideas for an upcoming final year conference they are taking part in.  They had to come up with an original idea using either app, VR or AR systems.  Ideas ranged from VR/AR technology enhanced treatment of phantom limb pain, juvenile arthritis, chronic back ache and even an exercise avatar incorporating AI.

Liz Falconer, David Hunt and Stephen Pyne (from CEL) shared their expertise and were able to advise students about the specifics and feasibility of their ideas.  The workshop was led by Osman Ahmed (HSS).

It was encouraging to see physios of the future being able to make the theory-practice links.