“If the task of the display is to serve as a looking-glass into the mathematical wonderland constructed in computer memory, it should serve as many senses as possible.”

Dr Mike Hobbs and Professor Debbie Holley have collaborated on numerous Augmented Reality Projects, and are passionate advocates of encouraging students to become co-creators in developing their knowledge and skills as part of the Curricula. Dr Hobbs has re-written the Guide to HP- Reveal, a free resource that enables the creation of user-generated content. 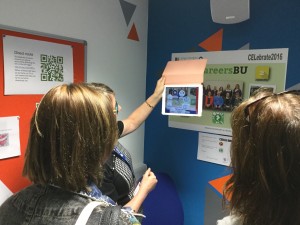 Extract from the guide:

HP Reveal is an Augmented Reality application, formally called Aurasma and you will still see articles and materials referring to the old name. Essentially it is the same application, with a few modifications, but most examples and instructions for Aurasma will still work for HP Reveal.

You can use HP Reveal to augment objects such as posters, handouts, brochures, books signs and even equipment. Using a smart phone or other mobile device you can combine the real world view with an overlay that plays sound, images or video to augment the scene as seen through the viewfinder of the device. Your trigger image acts like a web link to the associated media and needs to be sufficiently unique and unchanging. This will allow you to play the media, which is called an ‘aura’ locally on your device. You can publish your aura for public view, which uploads the content to the HP data servers, as individual creations or by grouping together through a named ‘channel’.

Link to the full guide:

A Short Guide To HP Reveal 1_1

Dr Hobbs and Professor Holley will run a research seminar on Augmented Reality during the summer – email dholley@bournemouth.ac.uk with the header: Augmented Reality Seminar if you are interested in attending.