Here is just a brief summary report before I conduct thematic analysis (this is part of a wider piece of work involving an RCT of use of VR in the school of Nursing at BU).

A minor technology glitch was reported, that was overcome by restarting the exercise. 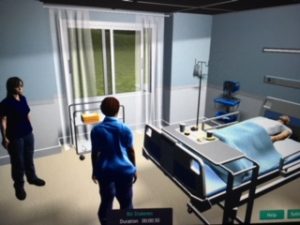 They found it was more interesting than using a case study written on paper:

“I found that because it was on the computer, I didn’t lose interest.  I feel like sometimes in a lecture, when it is a long lecture, if we had breaks to do something like that (VR simulation), like every couple of hours, people would be more interested and we would learn better.”

“I found it really good because it was sort of like a game, so it was really fun to actually sit there and complete it.”

And less “pressure” than learning a case study live on a ward:

“I think it is quite helpful having the simulation for it.  Because if you are learning it as a student on placement you have a lot more pressure.  It is someone’s actual life you are going to mess up if you get it wrong… So it is really good to have it on a (virtual) ward setting, but where you are not going to get in real trouble if you get something wrong.”

“Because it is one thing saying this is a list of instructions, but I mean I have never even seen a hypobox before, that you would use to treat diabetes.  So it is all, this is what you would do, but if you do not know what things look like, then it is a lot harder.  I am quite a visual learner anyway so I found it really helpful.”

“And some of the terms and the things you encountered, were really helpful, because you may not have encountered that yet, being on a placement on a physical ward.  So it has given you a pre-idea of what can happen and what are the ways to treat it.”

Those who do not think they are good at science:

“Being a mental health nurse, and I don’t really have a science background, I find the A&P and physical side of things a lot more difficult than anything else.  So diabetes if tough for me to understand.  I have worked with patients that have diabetes and have noticed that nurses unless they are specialists and have found that they struggle with that. “

And those who have a Specific Learning Difficulty such as dyslexia, found the text box format helpful and would recommend a combination of text box and chatbox:

“I found having the text box there means you can read it more than once, so you do not have to recall what it said. You could have the choice between words or voice chat or both?”

“I am dyslexic so I process things really slowly, so by having a text box, I can take my time.  If the talking was quickly, I probably wouldn’t pick up on it well.  If it was something we were doing in a lecture and everyone else was getting it, I would then feel bad if I wasn’t understanding it.”

“Sometimes some of the words, the medication words are quite long and you pronounce them differently. So text boxes are better for complex drug names etc.  If you see the spelling written that can help as well.”

And once again there was a call for more scenarios:

“It would be really useful to have a simulation for an older dementia patient.”

“Definitely a community setting would be great.  A clinic room, the signs, different disposable bins, sharps boxes etc.  So you can visually see it.”