The ultimate chic location of Ravensbourne University down by the Millennium Dome was the location of this years  @wonkfest18 –  500 academics, policy makers and industry shakers came together to discuss, debate and future spot Higher Education trends. 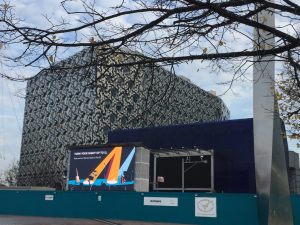 Sir Michael Barber, head of the Office for Students emphasised its regulatory responsibilities, and challenged Universities over the need for financial discipline – there will be no state bail-out, and failing Universities should not expect the public purse to fund failure. Speaking about the 21C agenda, it was good to see ‘great teaching, great research and great combinations high on his agenda; with a call for ambition in terms of student access, success and progression. He closed with a challenge to university press offices – to tell the wider world what universities do and why. Getting across the infectious incitement of academic life is key to avoiding a popular backlash.

Link to his slides here: 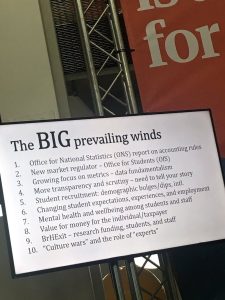 At times Gyimah sounded very similar to Barber, particularly when highlighting the need for universities to make a positive case and sharing what they are doing. He’d not yet seen any proposals from Augar, so was hesitant to draw red lines. But many did get the impression that he was not keen to see a return no number controls.

Sam Gyimah voted against Brexit because he felt that it would be complex, difficult to do, and may not benefit young people. But he was equally clear it was what the British people have voted for, and the policy of his government. He sees some opportunities for HE, not least the historically high increase in government investment in research and development. Investment in knowledge and innovation, he felt, was key for the future of Britain.

Is the “monoculture” just code for the fact that students don’t vote Conservative? Gyimah made the point that he’d never used language around “snowflakes” and “left wing madrassas” [this is true, but he’s been happy to be associated with one of these positions in the past – he spoke out against Toby Young], and outlined his vision that people should have a right to express their opinions – using Barber’s language (again) of the “pursuit of truth”. Debate, he argues, is always better than demands for retraction.

In 1997 Sam Gyimah invited Tariq Aziz to speak at the Oxford Union (he was denied a Visa by the Home Office). He felt it would be good to debate him, so he could be challenged by “very intelligent students”. He doesn’t regret this, and feels that such people should be challenged on the views they hold rather than prevented from speaking.

Post-qualification admissions represent an “interesting idea” but Gyimah has yet to be convinced by it. Likewise the idea of strong national standards to combat grade inflation and maintain standards.

On the vexed issue of lost contact time due to strike action, and the potential for legal challenge, he passed the issue back to the regulator (and the need for a contractual student arrangement) in a softening of his earlier position. On living costs, he stopped short of backing rent controls, but noted that this was the primary issue that students raise with him.