Pepper the robot answers questions from the Education Committee on the Fourth Industrial Revolution and the implications for education of developments in artificial intelligence. 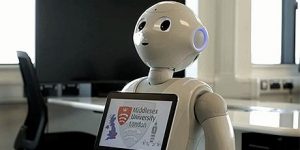 Purpose of the session

Pepper is part of an international research project developing the world’s first culturally aware robots aimed at assisting with care for older people. The Committee will hear about her work with students across the faculties at Middlesex University, including a project involving teaching primary level children, and what role increased automation and robotics might play in the workplace and classroom of the future.

After a demonstration by Pepper, the Committee will explore with witnesses, including those from Middlesex University, how robots can be used to support learning, and the skills needed to adapt to the growth in artificial intelligence and automation.

The Committee will first question a panel of experts on the suitability of the current school curriculum, the importance of re-skilling and lifelong learning and the effect of the Fourth Industrial Revolution on social justice.