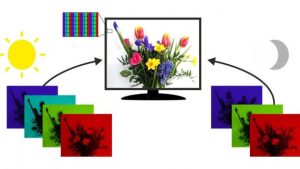 The impact was felt even if colour changes were not visible to the eye.

The researchers want to produce devices for computer screens and phones that could increase or decrease cyan levels.

Sleep researchers have already established links between colours and sleep – with blue light having been identified as more likely to delay sleep.

There have been “night mode” settings for phones and laptops which have reduced blue light in an attempt to lessen the damage to sleep.

But the research by biologists at the University of Manchester and in Basel in Switzerland, published in the journal Sleep, has shown the particular impact of the colour cyan.

When people were exposed to more or less cyan, researchers were able to measure different levels of the sleep hormone melatonin in people’s saliva.

Prof Rob Lucas said that it was not necessary for someone to be able to see the difference in colours, as the body reacted to the change even if it was not visible to the naked eye.