Zoe Furness reports on her co-creation project ‘Libertad’ with Natasha Jones and Susan Sloan as student and academic partners respectively:

The Research
Last summer I attended the Communication Summer Academy at Universidad de Las Americas in Ecuador with a group of students from Bournemouth University. An opportunity where students can meet with internationally renowned lecturers, study and travel the local area with interests in the fields of Animation and Communication and Marketing. The origin of my project is based around 2 indigenous communities we visited, and their reasons for inviting us as tourists to meet with them. The first community ceremony was with ‘Sumak Muyo’ a womans community outside of Quito. Here we took part in a seasonal ceremony where they gave thanks to mother earth, standing around an altar of rose petals and food offerings. The second was on the edge of the Amazon Rainforest just outside of Tena. ‘Comunidad Quechua’ La Libertad’’  welcomed and allowed us to join their traditional morning tea ceremony. Present at both were film crews, recording and documenting the events. This is becoming ever more popular amongst Indigenous communities, not just in the Amazon but on a global scale. There are many different reasons for a sudden want to record and document traditional and sacred practices. Great threats to indigenous communities living within the Amazon come from international corporations invading their territory and exploiting the Amazon’s natural resources, at the loss of the locals and the environment. Many communities do not want to be contacted as they live peacefully on their own and see the outside world as a threat or a disruption. However, there are communities who have decided to adapt and co-exist with the modern world, using limited tourism to share their knowledge about wildlife, tribal arts and their culture to support themselves and protect their land and way of life. As forest space becomes increasingly scarce, preserving their traditions and culture is of high importance to indigenous communities living within the Amazon.

Having gained valuable contacts from my time in Ecuador I saw this as an opportunity, I stayed in touch with Andy Gavilanes, a tour guide from Amazon Learning who took us to visit the community in the Amazon. Since then, we  have collaborated gathering specific research for a local Ecuador oral story.

Abstract
As a team of two Computer Animation Arts students, we intend to produce a short-animated film entitled: ‘Catalina’.
Indigenous community’s native to the Amazon are inviting film makers and tourists to document and preserve traditional practices belonging to that culture and community, as a method of sustainable tourism. In the Amazon, threats come from international corporations exploiting the Amazons natural resources at the loss of locals and the environment. Using my skills as a Computer Animation Artist, I wanted to use my experience and primary research of visiting a native Quechua community in the Amazon and create an animation that would respectfully reflect an indigenous oral story from Ecuador in relation to context and art style. 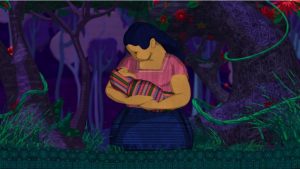 Catalina Elena Grefa, age 65, is a native Quechua woman living in the Amazon and is the voice you hear guiding you through the animation. The animation sets the scene in the Amazon rainforest and visually describes the scene Catalina narrates. She tells a personal story of her parents carrying her into the forest when she was just three months old and placed her down at the base of an Amazonian cinnamon tree. There they drank ayahuasca, known to them as ‘vine of the soul’, which is a tea brewed from a vine with hallucinogenic properties. Quechua culture strongly believe in spirits of the forest and they envisioned these spirits watching over their baby, Catalina. As there is no one true physical description of these spirits, as to each person in Quechua culture they are different, the animation shows their presence as growing vines with blooming flowers forming from the cinnamon tree and growing around Catalina in a basket form. Catalina describes how that experience passed knowledge from her mother to herself and tells us how she has now become a midwife. The animation shows her transforming from her younger self to her current age, cradling a baby in her arms at the base of the same cinnamon tree in the rainforest. She places the baby down suggesting to the audience that this ceremony is a repeated practice, as a way to bring a baby into the world and pass on knowledge.
Aims
To produce a short-animated piece of approximately 1 minute in length. The animation is a respectful reflection of Catalina’s story and is a tribute to her and her culture. It is a film that is appropriate for all audiences and can be used as a tool to enlighten people of Quechua culture and native practices. Aesthetically the piece will reflect Quechua tapestry in respect to style, colour and use of patterns. We aim to create a piece that looks like a moving 2D illustration encompassing both 2D and 3D animation techniques.

Final Notes
Feedback from Andy Gavilanes, when talking with him through emails and showing him our final piece he replied ‘I like it so so much, very powerful shots. It gave me a strong feeling of the forest and almost that feeling of sadness mixed with feeling of greatness. Wow. Very impressive’. This was lovely feedback to have from Andy and he will go onto show it to Catalina so we can hear her feedback.
Overall we feel as though we have achieved the aims we set out to achieve with this piece. The animation respectfully reflects Catalina’s oral story. With feedback from Andy being promising, he is now going to pass on the film to Catalina for her feedback which I hope she will enjoy. We aimed to create a 2D styled animation using 3D software resulting in a moving illustration which visually describes the story that Catalina narrated. As we didn’t get the narration until January I feel that we have worked well within the time frame and produced a beautiful style piece.