Aims
● To produce relatively high quality motion capture
● To add a sense of “human” presence to the piece through the camera, as if it had been “shot” by a production team
● To create a fun, colourful short film 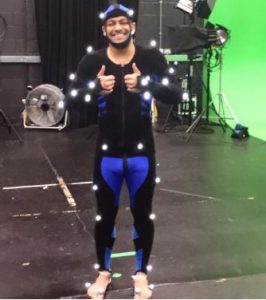 We knew that we wanted our dancer to be skilled in order for the dance to look professional. I emailed Pavilion Dance South West, and they invited us to pitch our project to Lisa Lort, who works there. She recommended dancer Dan Martin, who is involved in a number of projects in London. We followed her advice and contacted Dan, who was enthusiastic about the project, and agreed to help us. The funding allowed us to cover Dan’s travel and accommodation costs, which meant that he
could travel from London to work with us.

We met with Dan in London and showed him some of our inspiration for the project and the kinds of dance that we wanted out of him. We then spent a few hours with him in a dance studio, filming him dancing and giving him feedback. We came away with a large amount of footage, which was really great as it allowed me to edit a video together with the live action video. We used some of the funding from the co-creation scheme to travel to London to meet Dan in person, which was useful for the collaboration.

Motion Capture
We used the studio which the university provided to us to capture Dan’s dance. We could then transfer this movement onto a computer generated character. 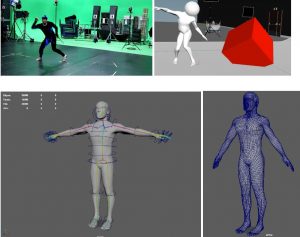 The motion was applied to a 3d model and then tweaked manually to fix any errors and to make it seem more natural. We then added a muscle simulation on top, which gave more realistic deformations in the 3d character model.

If you wish to read more about this project, please contact Felix Marrington-Reeve.