As part of an augmented reality/ virtual world ‘Gallery of  Excellence’  at the BU Service Excellence Conference, NU Research student showcased her innovative work. below is her report.

Recently, the term “Virtual Reality” is an emerging technology in 2015 with many genius development projects which has started to release worldwide. Game technology following that turns to a new page with Virtual Reality commence, parallel with the advance of motion tracking technology, which contributes to the whole new game generation based on this combination. The year 2015 also has been observed the successful combination of two representative devices are Oculus Rift and Leap Motion, belonging to Virtual Reality and Hand Motion Tracking technology, respectively.
On the other hand, following artificial pet game genre, Tamagotchi is a classical handheld game which was released in Japan in 1996. Game industry in the 21th century with two successful commercial games of Eye Pet on PS3 using Augmented Reality in 2009 and Kinectimals using Xbox Kinect in 2010, has convinced this game genre, which is the most reasonable for enhancing a new technology.
Based on those motivations, this research develops a prototype version of Virtual Pet game playing on the computer, using Oculus Rift and Leap Motion, which is a pioneer pet-raising game within its platform. Prototype game has a broad range of features including pet care, feeding, cleaning, training skills, play activities between human player and virtual pet, following a list of missions, aiming to grow up a puppy as well as human-pet friendship building. Game development uses a powerful game engine Unity, which supports for aforementioned technologies.
The research testing is also to evaluate the usability of the prototype version by conducting a survey with two independent groups of participants who are volunteers to play this prototype and Kinectimals. Data collection from playing duration is analysed using the quantitative research methods, contributing to promote the promising of Virtual Reality pet-raising game title. 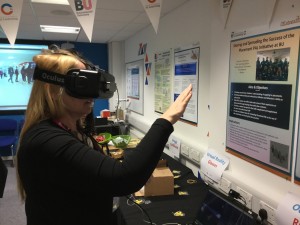 Theme Leader  Anne Quinney gets to know her new pet as part of the research project.