This year’s co-creation awards were handed out to 15 outstanding students from different faculties of BU. The event took place on the 1st of March on the 5th floor of the iconic Student Centre.

In line with BU’s commitme 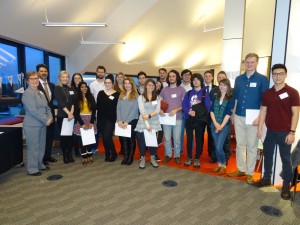 nt of encouraging staff and students to work together to co-create and co-produce knowledge and research, this year’s award aims to support the development of student led, collaborative projects, leading to co-created outputs.

Prior to announcing the winners of the competition, interested students identified a topic of relevance and an academic they would like to work with on the project.  Each contestant submitted a brief project plan with intended outcomes to a panel organised by the Centre for Excellence in Learning for review. Out of the several entries received, the following students were declared successful and each awarded £500:

The award winning projects include the following:

“A design and production of an innovative videogame experimenting with narrative structure, subverting design tropes, and commenting on the nature of the medium of videogames in a social context”

“From the midwives’ perspective: Media representations of childbirth and midwifery”

“An investigation into the motivations and reactions of social media users towards campaigns promoted via social media networks, with particular interest of studying ‘Slacktivists’” 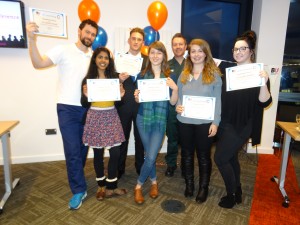 Chancellor Professor Tim MacIntyre-Bhatty who handed them out and Head of CEL, Professor Gail Thomas who hosted the occasion.

Hearty congratulations to all the winners!!!