This semester the Journalism Research Group will be hosting research seminars and film screenings every other week.

Please see below an initial outline of events and please do join us if you can!

Veronica Guerin is the powerful and poignant story of an Irish journalist who risked her life in search of the truth. In the mid 1990s, Dublin was nothing short of a war zone, with powerful drug lords battling for control. Their only opposition was Veronica Guerin (played by Cate Blanchett).

Harry is well-known for his work from the Gaza Strip.

His latest films are here: http://www.harryfear.co.uk/documentary-films

Harry is also know for his live reporting of Israel’s Operation Pillar of Cloud in November last year: http://www.harryfear.co.uk/blog/gaza-report/operation-pillar-of-cloud. 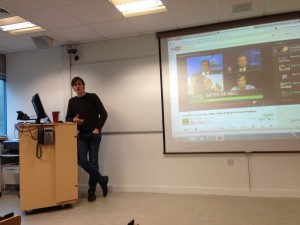 Harry has devoted his career to fighting for the plight of the Palestinians, but does this bring his journalism into question? Can advocacy journalists be a reliable source of truth, especially in the Middle East?

Harry will talk about everything from the fine line between campaign journalism and activism, to wider issues of the Middle East conflict and how he makes a living from this style of reporting.

It’s just one of six UK dates on his world speaking tour, so a huge thanks to Mat for organising!

Please note that our Visiting Researcher, Ricardo Almeida Dias, will be returning to Brazil shortly. We will therefore go for some informal leaving drinks / dinner after the JRG session on Wednesday. Please let me know if you would like to join us so we can book a table in advance.

Come along to the JRG to discuss the issues raised by the recent debacle at the Beeb — the Savile affair and Newsnight’s plight have raised questions about editorial control, power and responsibility and prompted many to ask whether there is now in the post leveson landscape, a crisis of trust in journalism which strecthes beyond Fleet Street into the newsrooms of the shiny new Broadcasting House.

Karen Fowler-Watt will make a short presentation on some of the key questions about trust and journalism and then open up to the floor for a debate. Refreshments provided!

An in-depth look at the torture practices of the USA in Iraq, Afghanistan and Guantanamo Bay. (Directed by Alex Gibney, 2008) 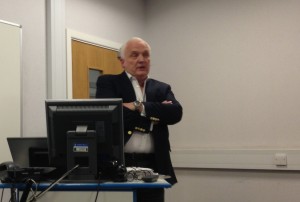 He has been a main anchor for much of BBC World News’ coverage of major international events including Kosovo in 1999, the Iraq war in 2003, the global financial meltdown and the attacks in Mumbai in 2008.

He was on air for six hours leading the coverage of the terror attack on the Twin Towers in New York on 11 September 2001, which went on to win the 2002 “Hotbird” Award for the Best News Channel.

Nik also presented coverage of Diana, Princess of Wales’ accident, then made the announcement of her death to a global audience estimated at half a billion.

Remember you must die. How one couple are bringing death to life in Bournemouth.

NewsLabBU teamed up with Guerrilla Pictures to produce a short documentary within 5 days as part of the International Documentary Challenge 2013. Students from BAMMJ and BATV were involved.

Update: the full documentary is now available on YouTube 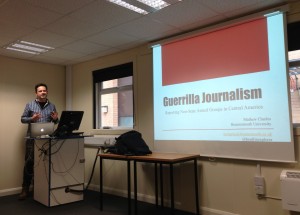