This week David Cameron celebrated a small victory after a spat with Facebook. The social network backed down on the publication of violent material after pressure from the British PM and complaints from users. The row erupted after a video showing a woman being beheaded in Mexico sparked outcry.

Facebook said on Monday that it would allow users to upload graphic material so it could be “condemned”.  David Cameron described this as “irresponsible”, but only two days later the social network backed down and removed the video.

Facebook also said it would tighten its policy on graphic violence, but stopped short of reinstating the ban on beheadings it lifted in May this year. According to the new rules, videos depicting violence must carry a warning and can only be shared with an adult audience. 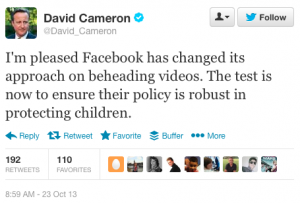 “I’m pleased Facebook has changed its approach on beheading videos. The test is now to ensure their policy is robust in protecting children.”

But this misses the point.

Of course graphic content should not be celebrated or shared for sadistic purposes. Younger audiences must also be protected from gratuitous violence.

But the fact is that beheadings are a part of life for some communities in Mexico. Sheltering ourselves from such atrocities may help us sleep better at night, but it does not stop the violence.

This week I released a new cross-media documentary project, The Engineer, which is about gang violence in El Salvador. Some viewers or users will be shocked. It is a graphic and sometimes harrowing portrayal of murder, kidnap and rape. It is difficult to watch. Children recounting their experiences of murder and rape is disturbing. But it is not sensational, it is not gratuitous. It is an attempt to jolt us from our comfort zones. Not everyone is able to live as freely and securely as we do.

I won’t apologise if our documentary is hard to watch. My thoughts are with those that cannot escape this violence. These are the people that should not be ignored. They need our help.

Children should not be exposed to such horrors, but think of the teenagers of El Salvador. One government official told me that 75% of under 25s end up dead or in prison. As this gang member told us, the choice is to kill or be killed.

I understand you want to protect your children from this, Mr Cameron. But do not shield them completely. Ignoring the violence does not make it stop.

And if you are that concerned, I am sure the governments of Central America would welcome your assistance.

[author] [author_image timthumb=’on’][/author_image] [author_info]Mathew Charles is a documentary maker and lecturer in television journalism at Bournemouth University. He is a former BBC correspondent.[/author_info] [/author]