On Sunday, the people of El Salvador go to the polls to elect a President. It is a small country with a population of 6 million. It is also a very poor country, where the top 5th of the population possess more than half the country’s wealth. Yet inequality is not the main issue in this election. It is violence.

It easy perhaps to underestimate the significance of Salvadoran politics, especially sitting in Europe, but this vote will be significant. Since the end of El Salvador’s brutal civil war in 1992, the country has fallen deeper and deeper into a bitter gang rivalry. However, a peace deal between the country’s main gangs, brokered in 2012, could provide answers for conflict resolution all over the World. 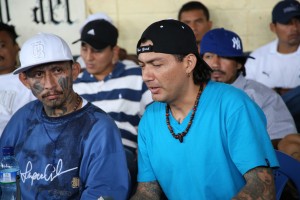 MS13 Leaders, still from The Engineer

Rival gangs 18 Street and MS-13 are embroiled in a violent turf war, fuelled by the El Salvador’s long-lasting legacy of violence and poverty. The gangs murder, they rape and they carry out huge extortion rackets.

Gang members call themselves soldiers. They say they are engaged in a battle with “the system,” as well as their rivals. Their aim is to defend and provide for their barrio, or neighbourhood. When I was filming for my documentary, The Engineer, back in 2011, one gang member told me he was fighting for “the cause.” When I asked what that cause was, he simply replied, “to die.”

Indeed one Salvadoran government source told me that 75% of young men either end up dead or in prison by the time of their 25th birthday.

El Salvador has consistently had one of the highest murder rates in the world with an average of 14 a day. This was until the truce of March 2012. As a result of the peace process, the official murder rate dropped by 64% to an average of 5 a day, though in recent months it has started to climb once more.

As part of the truce, the gangs pledged to halt recruitment in schools, and created so-called peace zones. But many have their doubts about the sincerity of the deal. Consecutive opinion polls show that more than 70% of Salvadorans do not believe it is real.

The truce in tatters?

Crime scene, still from The Engineer

Critics of the truce say it has simply given gangs time to gain more turf and gain access to key drug trafficking routes, though the extent to which the gangs co-operate with the drugs cartels is debatable.

It is the discovery of a secret mass grave with 44 bodies this month that has severely damaged the credibility of the truce. Many see it as evidence of what they had expected all along – that the murders continued, only in secret. This is what one member of 18 Street had told me in 2012. He said the gang continued to kill people and they were being more careful about where they dumped the body. “With no body, there is no evidence,” he said. “And with no evidence, there is no crime.”

The media and other analysts have been quick to assume that the 44 bodies in this grave are the result of the bitter rivalry between 18 Street and MS-13. But perhaps they are overlooking the significance of the rivalry that exists within the gangs themselves, and within 18 Street in particular.

18 Street has recently split into two factions. The gang member I met was on the run from his own gang. The rival faction was trying to kill him. The police have indeed confirmed the secret grave found in Lourdes was dug by 18 Street, but if the victims are also 18 Street members, then are we right to assume the truce has collapsed? Perhaps it is more a question of a new front being opened.

However, even without the discovery of this mass grave, there is ample evidence that murder is still happening at an alarming rate. In July, 2013 a spate of violence brought the average murder rate in El Salvador up to 16 a day – above pre-truce levels. The number of people reported missing has also increased since the truce was brokered, though official statistics are often unreliable.

Lack of transparency hides lessons to be drawn

Despite its success or failure, the truce matters to the international community. El Salvador is not the only country to be torn apart by bitter gang violence and the mediation process could provide key lessons for other national and international actors struggling to come up with responses to post-conflict and criminal violence.

This is therefore not just another election. There are many actors in many regions of the globe who will be paying close attention to how this election plays out, and more importantly, to how it will impact on the country’s fragile peace process.

The problem is that the details of the truce in El Salvador are sketchy at best.

The two negotiators, who actually visited the gang leaderships in prison and facilitated the truce, were military chaplain, Bishop Fabio Colindres and former leftist-guerrilla and Deputy in the National Assembly, Raul Mijango.

The truce was actually supposed to be a secret until it was leaked by the Salvadoran news organisation, El Faro, in March 2012. As a result of the revelation, journalists at this well-respected online news portal faced death threats and intimidation.

El Faro claims the Government is behind the truce, but the Government denied any part in the process for six months, and still continues to flip-flop over its precise role. In a recent televised debate, the election front-runner, incumbent Vice-President Salvador Sanchez Ceren, denied deals had been cut with the gangs, and played down the Government’s role in the truce.

There has clearly been a distinct lack of transparency surrounding the mediation process. Even two years on, the exact terms remain unclear.

As part of the deal, gang leaders from both sides were transferred from maximum security jails to more open prisons. It is also understood that gang leaders are demanding a repeal of the 2003 Anti-Gang law, which makes it illegal to belong to a gang and gives the police supplementary powers to deal with gang violence. On top of that, the gangs have demanded a withdrawal of the army from the streets, and the pull-out of police patrols from gang dominated communities. It is not known, however, how far the government has been willing to concede or if any promises have been made in return for votes at the forthcoming election.

The truce has undoubtedly handed the gangs new political powers – not in the sense they are forming their own political party with their own ideology, but such is their leadership structure and dominance over certain communities, that they are able to deliver thousands of votes to the candidate and party that appeases them most. This is most likely to be the ruling left-wing FMLN, who at the last election in 2009 ended almost 20 years of rule by their main opponents, ARENA.

The ARENA candidate, a former mayor of San Salvador, Norman Quijano, has promised to introduce a military draft, and his pledge to return to the mano duro or iron fist security policies (implemented in the early 2000s) is popular with many voters. That said, the polls show he is failing to gain ground.

It seems unlikely the front-runner, incumbent Vice President and FMLN candidate, Sanchez Ceren will get the 51% needed to win in the first round of the vote on Sunday. A run-off is planned for March 9th.

What is happening in El Salvador could be an important lesson in conflict resolution for the international community –  if only those involved would be honest and open about it.

[author] [author_image timthumb=’on’][/author_image] [author_info]Mathew Charles is a documentary maker and lecturer in television journalism at Bournemouth University. He is a former BBC correspondent and co-director of The Engineer.[/author_info] [/author]