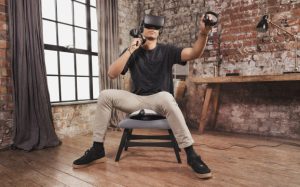 Placing a pilot in the cockpit of an F-14 in the middle of a combat mission is about as difficult as it sounds – even when you’re just replicating the experience in a training facility. Yet we’ve had some version of flight simulators for decades, and as the technology behind them has grown increasingly sophisticated and decreasingly cost-prohibitive, the designers working in the virtual reality space continue to break new ground — and deliver to new markets.

As a simulation engineer at Lockheed Martin in the mid-1990s, I had a front-row seat (and, in some cases, had my hands quite literally on the wheel — or flightstick) for some of these advances. And when I later joined Harmonix, where I was technical director of Guitar Hero, Rock Band, Dance Central and other games, I was even more deeply involved in creating motion technology and virtual simulations for the entertainment space. In a short time, I’ve seen the field grow exponentially. With virtual reality now being applied to activities as far-ranging as athletic training, physical rehabilitation, concert performances, and gaming, the lines between fun and function have blurred.