Debate Stage: crisis, what crisis? Is student mental health really a “no brainer”?

Student mental health is making headlines almost daily – so this session was (unsurprisingly) packed. But kicked off by focusing whether or not this amounts to a ‘crisis’.

Mackenzie said he was expecting to major on academic policy initially – but his focus shifted to mental health. His team identified issues with the univeristy “fetishising waiting times”, departmental autonomy and under-investment – but above all, genuine surprise at the scale of the problem.

Mackenzie said unions aren’t clinicians so need to work closely with university services. And their role is to connect outcomes with social policy to prevent issues from resurfacing. Mackenzie stressed the need to accept unions can’t fix everything and cited the huge number of external pressures on students beyond universities’ reach. 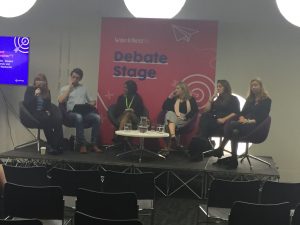 Barron spoke as a service leader and a mother of a graduate. Barron doesn’t believe there is a crisis – but that we are more aware of it as a society. The perception stems in part from sensationalised media coverage, which in turn creates pressure on staff. Financial advice can be a key to reducing stress related to debt – and many students come to university without support networks. She believes we shouldn’t be duplicating NHS services – but providing appropriate support and guidance to help students navigate higher education.

Crossen Jody argued too often universities separate themselves from the NHS in campaigning. She said this was an error – higher education needs a fully functioning NHS.

She said there was no such thing as a typical student so services shouldn’t be one-size-fits-all. She argues that access to services should be looked at – such as being delivered in students’ first language, having dedicated support for survivors of sexual assault, and being accessed across the year not in six session blocks. Peer-led programmes can be successful but students need services they can trust.

Crossen Jody also argued that this crisis shouldn’t be seen isolation, there is a link to tuition fees, debt and accommodation costs.

Shaw cited Unite Students has tracked a rise in declaration of disability or mental health condition, they have also seen a rise in complex cases within residences, and reports of sexual assault. She stated the desire for a multi-agency approach, which is happening. Transition between different stages in education is crucial – discussion with parents reveal they speak to students “about pots and pans” but not emotional preparation.