It was fantastic to witness the marvellous reactions from members of the public who attended our Augmented/Virtual reality (AR/VR) for Education event.

Children were amazed to see a Gorilla come to life when scanning an AR trigger point using HP Reveal.

Some of the best reactions of the day were from the little boy shown in this picture.  He is using the Oculus Rift to explore ancient Avebury (brought to life in VR). 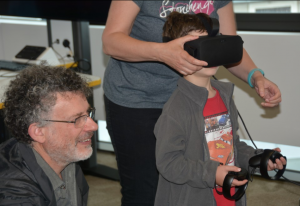 Moments early he had tried using a mobile phone inside a googlecardboard headset to watch a 360 VR video of a waterslide.

He couldn’t believe the fascinating changing scenery either-side of the water slide.

It demonstrated how by simply using a cardboard headset, people (especially children) can become immersed in the experience.

In fact, Amin et al. (2016) found that in their study, googlecardboard provided a good level of immersion when compared to Oculus Rift.

Having said that, the reaction to the Oculus Rift also supassed our expectations.  It was interesting to see little children jumping up to try to see an animated face in a mirror, crouch down when seemingly on the edge of a skyscraper, and step back when the TRex approached.

Young boys who had been leaping about in the queue found the VR Avebury experience to be tranquil and relaxing.  Adults reacted by laughing out loud in suprise at the Rift demonstration, and one lady in particular (who had learning needs), enjoyed the experience so much, that she vowed to return later in the day.

The event demonstrated how VR/AR technologies can be used to engage and inspire people of all ages and abilities.  VR can take people (including those with mobility issues) to another location entirely and AR can add in extra layers to enhance the educational experience.  These technologies can be inclusive and effective as tools to aid learning.

If you would like to explore possibilities for these technologies for your lecture or unit, please contact the CEL team. @cel_bu