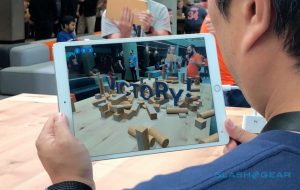 Currently, if you have a virtual object in a real-world scene, like a metal bowl on a wooden table, the wood’s texture won’t be reflected in the metal bowl. What environmental texturing does is pick up details in the surrounding physical textures, and then map that to the virtual objects. So, the metal bowl would slightly reflect the wooden surface it was sitting on; if you put a banana down next to the bowl, there’d be a yellow reflection added too.

Environment texturing gathers the scene texture information, generally – though not always – representing that as the six sides of a cube. Developers can then use that as texture information for their virtual objects. Using computer vision, ARKit 2.0 extracts texture information to fill its cube map, and then – when the cube map is filled – can use each facet to understand what would be reflected on each part of the AR object.