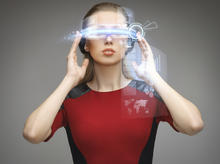 The non profit behind the leading AR+VR conference and expo has announced a major initiative to promote an Open AR Cloud.

You’d be forgiven for having no idea what that is, but it’s a concept you should familiarize yourself with. You’ll certainly be hearing about it a lot in the months and years to come.

The craziest thing about that statement may just be that a lot of very intelligent people believe it’s true.

Described by some as the world’s digital twin, the AR Cloud is essentially a digital copy of the real world that can be accessed by any user at any time.

To unpack that, it’s helpful to use the more familiar concept of Google’s pagerank.

One Response to “The urgent case for an Open AR Cloud”