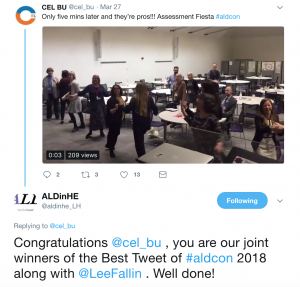 It’s official!! The CEL team are THE BEST Tweeters across the UK… or at least at the ALDinHE Conference, which took place March 26-28 in Leicester.

CEL Theme Leaders, Dr. Shelley Thompson, Anne Quinney and Dr. Ann Luce, along with Head of CEL, Prof. Debbie Holley made the long trek north over the Easter break to showcase BU’s Assessment Fiestas and how they can be adopted across departments, faculties and the entire university sector.

Announced, at the opening keynote, conference organisers launched their first ever ‘Best Tweet of the Conference’ competition, and the @cel_bu team jumped into action!

There may have been some ‘sweet talking’ (read Twitter stalking) and promises of ‘jovial drinks’ (read bribery) at the conference dinner, but the team held their heads high and won this particular competition on merit!

With 209 views of the video of our mini assessment fiesta showcased at the conference, how could we not win?! £50 is now on its way to the team, though we’re still waiting…

The BIGGEST win of all, though, was the positive feedback regarding the fiestas, and the requests from universities in both Southampton and London to come and share our best practice with them.

All in all, we’re pretty darn chuffed with ourselves!

One Response to “@cel_bu, the BEST TWEETERS in the land!!”