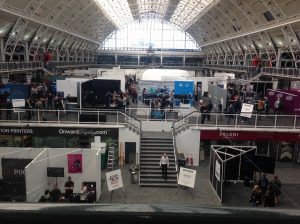 The show is designed to showcase new technologies and how they can be used in business and education, however, the emphasis was very much on business and staff development.

This year the focus was very much on virtual reality (VR) with nearly all the exhibitors and talks using that technology, unfortunately there was little in the way of other technologies, such as 360° camera’s or augmented reality (AR).

Although there was a full day of parallel conference talks and show stage presentations, most were directed towards business or were presentations from among the exhibitors with only three presentations being specifically aimed at the educational sector.

Professor Shailey Minocha from the Open University discussed the opportunities afforded and the barriers presented by integrating VR and AR into the curriculum, explaining how they used VR and Second Life to replace field trips for Geology students. Joanna Webb from Pearson talked about the use of AR, or ‘layered learning’ as she preferred to call it, allowing learners to choose how they learn with a combination of teacher lead and self-directed learning. Finally David Whelan from http://immersivevreducation.com/ demonstrated the sort of VR content the company was creating using the Engage platform, with a walk through the Titanic and a stroll around the Apollo 11 landing site. 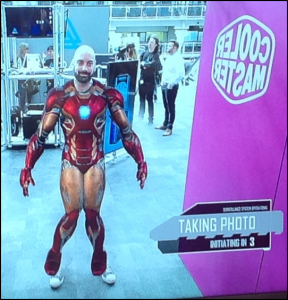 Unfortunately, because he was wearing black trousers, the system had issues with superimposing the legs correctly.

Among the exhibitors was Teslasuit (https://teslasuit.io/) demonstrating fully integrated smart clothing with Haptic Feedback, Motion Capture, Climate Control and Biometric Feedback systems. This looked very interesting, however, the team struggled with connecting the suits blaming poor Wifi. Similarly the HP Z VR backpack (http://www8.hp.com/us/en/campaigns/vrbackpack/overview.html ), effectively a wearable VR PC, could only be demonstrated from a desktop due to what appeared to be poor battery management. This was a pity as the experience was rather good, but the ability to move around would have made it that much better. 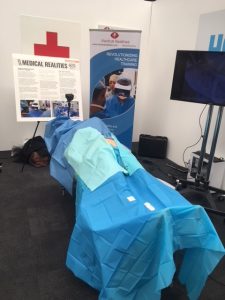 Among the content providers, Surround Vision (http://surroundvision.co.uk/ ), specialising in 360 and VR, displayed some very impressive material and Make Real (http://www.makereal.co.uk/about-makereal/) showed content created for business and museums. However, the most interesting was probably the Medical Realities platform (https://www.medicalrealities.com/ ) which offers high quality surgical training in VR.  This simulation has be created as part of a collaborative research project with Oxford University which is now being used as part of the curriculum for trainee surgeons. 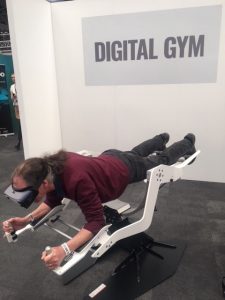 Without doubt, the best fun of the day was the Icaros fitness trainer (https://www.icaros.com/). If you are familiar with the ‘Plank’ exercise, this takes that a big step forward by combining VR with a simulator that you ‘steer’ by moving your body weight. This allows you to ‘fly’ through whichever VR scenario has been selected, both entertaining and a good work out.

Overall, this was an interesting show, although lacking in education directed content, it was a good indicator of the technologies that are being developed and also of the interest that businesses are taking in these technologies. These technologies in industry are potentially the future tools that students will need to be prepared for while studying at University.