Four members of the BU Learning Technology team attended the BETT conference in London in January. The event contains a mix of demonstrators, demonstrations and short talks.
To give you an idea of what the event is about here is an excerpt from the BETT website:
‘Creating a better future by transforming education
Bett is the first industry show of the year in the education technology landscape, bringing together 850 leading companies, 103 exciting new edtech start ups and over 34,700 attendees (131 countries represented) from the global education community, that come together to celebrate, find inspiration and discuss the future of education, as well as the role technology and innovation plays in enabling all educators and learners to thrive’ https://www.bettshow.com/about-bett#/. 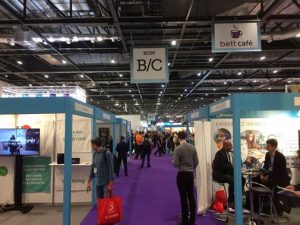 The event was really well organised and there was a lot of focus on technology in secondary education as well as HE. Walking into the Excel really gives you the overwhelming impression of how big this event is. There are literally hundreds of stands with eager suppliers waiting to converse. Once you have registered for the event you will be sent links to floor plans and lists of suppliers. If you decide to go you plan your trip, which talks you would like to attend and which stands you plan to visit. It’s a challenge to fit everything in one day. 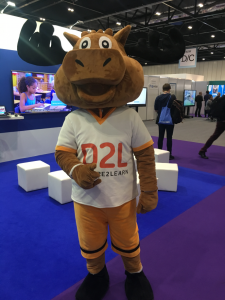 My main focus for the day was to investigate the AR/VR stands as well as find out what the future holds in educational technology. I was really impressed to see how advanced VR has already become in education and suppliers were offering off the shelf VR headsets with pre-loaded content which negates the need for mobile devices. Could this be the way forward at BU? There were a lot of variations of 3D Printers as well as touch screen and smart board tech. The stands varied from providing TEL solutions from preschool to HE.

As well as the expected technology giants there are hundreds of smaller and more independent vendors. I found It was well worth speaking with their representatives as they have a wealth of product knowledge and offer great institutional deals (plus lots of free promotional gifts). You can never have enough pens!
I only managed to attend one talk which was presented by our very own Professor Stephen Heppell entitled ‘Workload Relief’ where Stephen focussed on developing alternative and innovative methods of teaching and also workload management. As expected Stephen’s talk was insightful and full of fantastic examples of how he has explored the use of technology to future proof teaching styles for students of all ages.

Here’s what some of our other learning technology colleagues said about the event.. 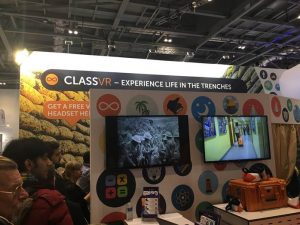 Mike Mallia “I personally enjoyed the ClassVR stand, that had a virtual experience room of being in the WWII trenches due to a previous career with the British Army. It was a very interactive and emotional experience, and great as a history lesson.” 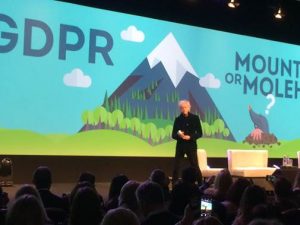 David Hunt “I agree with Mike, the ClassVR stand was very interesting, obviously visited the D2L stand. Lots of 3D printers and digital signage interactive screens. My special interest was the Vuse 360 camera” Click here for highlights of the event

Katy Abbasirad “BETT it’s a huge event where there are hundreds of educational suppliers, this year it has been held at Excel in London. The event is free but you need to register and its over 4 days period.
BETT is a good event to meet some suppliers and talk about working with virtual reality (VR), VLE and many other interesting topics and it gives you chance to have discussion with the suppliers and see presentations as well as look at what is there on display.
My highlights from the show were the VR sections, classroom learning (HABOOK group) and the talk by Stephen Heppell .
Absolutely amazing show with loads of fanatic learning products the only downside was not many suppliers were focusing on a higher education but overall it was a great event.” 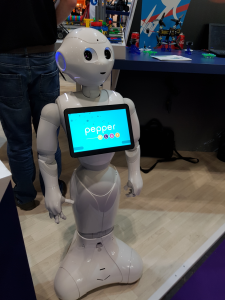 The BETT Show takes place every year in the EXCEL, London. You can find more information about next year’s show here: https://www.bettshow.com/#/