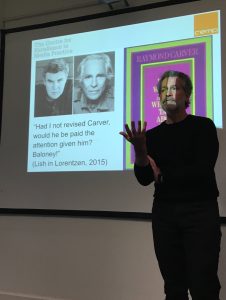 A few weeks ago I was invited to give a talk at the UCL Knowledge Lab on ‘creativity’, which is one of my favourite subjects but not, perhaps, for reasons you might expect.

My title was “Thinking Critically about Creativity” and it gave me the opportunity to reflect further upon how this noun is invested with so much hope, excitement and idealism – everyone wants a piece of creativity, from the Department of International Trade with its ‘Creativity Is Great (Britain)’ campaign, to mathematicians such as Eugenia Cheng who got quite indignant on a recent episode of The Life Scientific at the suggestion that maths was not ‘creative’.

The problem is that the research into creativity tends to begin with the idea that it is a ‘thing’ to be discovered, elicited and realised, but the ‘nature’ of this thing is always defined culturally, so scientific studies tend to find what they’re looking for. Creativity is a term which has been more or less arbitrarily applied to such diverse phenomena as ‘divergent thinking’, the arts, the sciences, a rarefied aspect of human behaviour, a common and everyday aspect of human behaviour, the product of ‘genius’, the manifestation of madness, and so on.

Ken Robinson seemed to provide a neat and transferrable definition in his 2001 All Our Futures report, in which he attempted to bridge a morality of education with the exigencies of the ‘creative economy’; he offered this stipulative definition: “imaginative activity fashioned so as to produce outcomes that are both original and of value”. The problem is that every term here is subject to interpretation, which is why Anna Craft, for example, distinguished between ‘Big C’ and Little c’ creativity, and Margaret Boden between ‘Personal creativity’ and ‘Historical creativity’.

So where does this leave us in education, where we often strive to ‘be creative’ and to nurture ‘creativity’ in our students? My suggestion was (and is) that we acknowledge the complex, contradictory nature of this term, that we refuse to use it casually as if it were universal or self-evident, and that we take responsibility for local definitions. Both Andreas Reckwitz and Angela McRobbie point out that ‘creativity’ is a concept which is increasingly embedded in the contemporary workplace and that it plays a part in generating “obeisance to the regime of novelty” and the “gendered practice of ‘passionate work’”. Creativity is not a (good) thing. Let’s think about it critically.