A VR/AR special interest group met this morning to explore the use of various technologies in relation to potential use for the care of Dementia patients.  The meeting was chaired by Sue Thomas (Visiting Fellow) and included two members of staff from Richmondwood Residential Care Home (Johnny and Lucy Glazer).

Liz Falconer and David Hunt demonstrated The Oculus Rift and Virtual Worlds (e.g. The Avebury site) on a gaming laptop.  Dr Xiaosong Yang (with Ehtzaz, also a computer animators) brought along their expensive HoloLens.  Michelle Board demonstrated an augmented reality app called “A Walk Through with Dementia”, using google cardboard.  She explained that next week 250 students will use the app to experience how patients with the condition might feel. 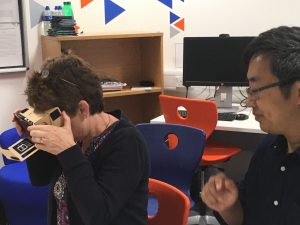 Everyone was surprised at just how immersive and fun the Oculus Rift was to use.  The graphics and sound were very sharp and everyone found that the headset was comfortable.  Some members of the group commented that to their relief they had not felt disorientated or nauseous whilst using the technology.  Once carefully set up by David -it was quick and simple to learn how to use- even for people who were not used to games consoles.  However, one thing to note is that it must be linked up to a computer that has a very powerful graphics card. 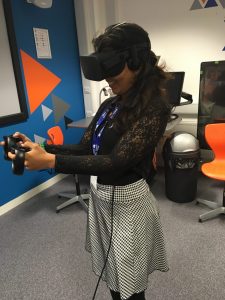 After spending the morning testing the various pieces of technology and software, the group discussed possible affordances for use with dementia patients, with particular reference to the care home.  Ethical considerations were also discussed; for example, the likelihood of triggering negative and distressing emotions.

Richmonwood staff fed-back about which equipment and software could be of use in their setting.  They felt that the Oculus Rift was far more immersive (because it is VR) and in many ways more suitable for their residents.  Johnny suggested that haptic gloves might be simpler for patients to use rather than the more complicated haptic controls.

The HoloLens was very impressive for different reasons.  We experienced what it would be like to walk around an ancient Inca site in Peru.  Through the headset you could watch and listen to other visitors wandering about the site.  You could also examine objects and click on them to listen to audio explanations.  Because the HoloLens employs mixed reality as opposed to virtual you could see around the edges of the display, so therefore walk easily around the environment.  The computer is built into the headset, therefore the sense of freedom of movement was greater.  However, on this occasion the Oculus Rift was deemed more suitable for the intended user. 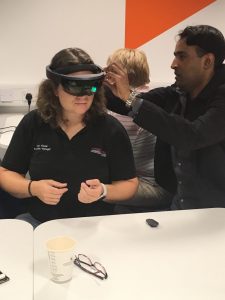 (Lucy and Ehtzaz using the HoloLens)

The special interest group will meet again after Christmas to develop ideas further.

To find out more about HoloLens click on this link: https://www.microsoft.com/en-gb/hololens

And for Oculus Rift click on this link: https://www.oculus.com