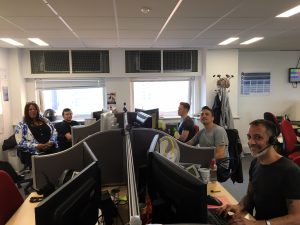 Picture: the IT Service Desk team

The Vision4Learning (V4L) project team were welcomed by BU’s IT Service Desk last week, as part of an ongoing programme of communications aimed at keeping BU up-to-date with the latest project activity.

The meeting with the IT Service Desk was just one of a series of presentations by V4L Project Sponsor, Dr. Gelareh Roushan and V4L Principal Project Manager, Wendy Drake, throughout April and May 2017.

So far, V4L have attended all four Faculty Academic Boards as well as face-to-face discussions with Faculty Executives, senior management teams and Heads of Education. From June to July 2017, these meetings will extend to professional service departments such as Estates and Human Resources, as BU prepares for the implementation of Brightspace’s first phase at the start of the new academic year.

“Not only is it important to let everyone know what’s going on with our new virtual learning environment”, said Wendy Drake, “many people are under the misconception that V4L is just about Brightspace. In fact, our remit is much wider”, the V4L Principal Project Manager continued.

The V4L project was established in 2015, working closely with the Centre for Excellence in Learning to facilitate innovative teaching and learning at BU.

Feedback from students and staff during the externally facilitated Changing the Learning Landscape project (2013 – 2014) indicated that BU needed a modern, more intuitive tool to support pedagogic innovation, a review of BU’s VLE was encompassed into the V4L project’s scope. BU’s legal obligation to offer the VLE contract for re-tender under European law provided a timely opportunity to further respond to student and staff concerns.

“We’ve come such a long way in a relatively short space of time. Work is well underway on configuring Brightspace and integrating it with other BU systems. Extensive testing is being done by the IT Test team on both Brightspace and myBU to ensure a smooth start to the new year”, said Wendy Drake.

“We’re now four weeks into staff training with a further two to go. There’s a flurry of activity behind-the-scenes to make sure we’re production-ready for September. We’re on track and excited about the Brightspace launch”, Wendy concluded.

For more information on V4L, to view FAQs, to ask questions or leave feedback, monitor the V4L Sharepoint site or email V4L@bournemouth.ac.uk.