The Student Centre was transformed earlier in the month to make way for the annual BU Waste Audit.

The Audit was run by an enthusiastic group of student and staff volunteers who were willing to pick through the 22 bags of General waste and Mixed Recycling which had been collected in the morning from around the Talbot and Lansdowne Campuses. While not the most glamorous of jobs the group weren’t afraid to get their hands dirty and made good progress, quickly identifying that food waste and liquid which contaminated otherwise recoverable materials were the main offenders.

Having collected two bags of general waste from each compound on the two sites and mixed recycling bags from each of the compounds on Talbot the audit aimed to identify how the bins are currently being used, whether people are separating their waste and what could be done to improve recycling rates across the university. 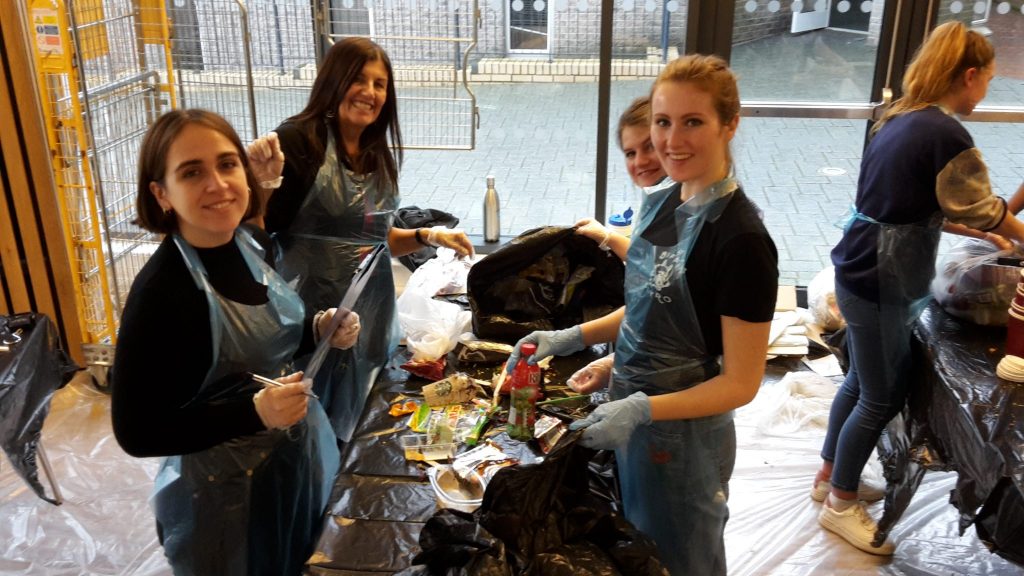 Food waste in the General Waste was down slightly – 23% to 18% between 2016 & 2017 audits. From this figure though, four bags were responsible for 58% of food waste in total- highlighting the under provision of Food Waste Recycling facilities in some sites such as Studland House. The roll out of twin bins which incorporate food waste in café areas will help improve this figure.

Contamination and getting people to separate there waste before disposal remain a big issue. The results of the audit identified that up to half of the general waste could have been recycled if it wasn’t contaminated. It also highlighted high levels of contamination in the mixed recycling, with lots of half full coffee cups which hadn’t been poured away spoiling the ‘dry’ mixed recycling. A rethink of the waste labeling across campus to tackle this challenge and make labeling of bins clearer is now underway – any thoughts are welcomed at sustainability@bournemouth.ac.uk.

The highlight of the afternoon however was the discovery of a general waste bag full of  Soft toys. The bag which had originated from the EBC was full of a selection of children’s toys. The toys, which would have been sent for energy recovery, were taken to a local dog home for reuse. If you ever have any questions about whether you should be Reducing, Reusing or Recycling something, please feel free to ask us at: sustainability@bournemouth.ac.uk.