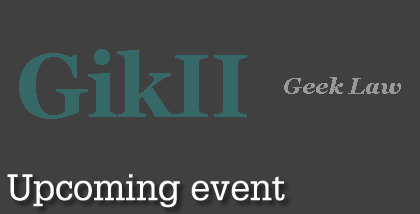 The Centre for Intellectual Property Policy and Management (CIPPM) together with the Law Department was delighted to host the 8th GikII Conference which was held on 16-17 September 2013. The conference was chaired by Dr. Dinusha Mendis, Co-Director CIPPM and Professor Lilian Edwards, Deputy Director CREATe, University of Glasgow and Professor of Internet Law at University of Strathclyde.

The conference has previously been hosted at the Universities of Edinburgh, Oxford, Amsterdam, London, Göthenborg and East Anglia. This year’s conference dubbed the ‘beach edition’ did not fail to live up to its name – GikII. Invited speakers presented papers focusing on present and future issues in the field of law and technology. The papers included a consideration of the legal issues surrounding rights of robots, cyber security, 3D printing, privacy, genetic testing, autonomous cars, algorithms, fan fiction and a lot more. Full details of the programme can be found here.

A write-up about the conference was published in the New Scientist on 16 September 2013 which further raised the profile of this hugely popular event in the field of law and technology. The article authored by Richard Fisher of the New Scientist and titled ‘Future Law: Can you be slandered by a robot?’opened up with the statement that “in a world awash with robots, teleports and self-driving cars, you are going to need a good lawyer”!

A short video about the conference as explained by the Co- organisers Dr. Dinusha Mendis and Professor Lilian Edwards can be accessed here.