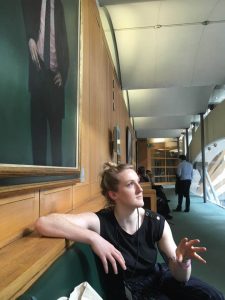 “My research was developed as a result of UNICEF declaring that improving breastfeeding rates was a national priority. As an advertising student, I was interested in the influence that Facebook communities have on supporting and advising breastfeeding mothers. My research concluded that participating mothers have a more successful breastfeeding experience when supported by life-experienced mothers in social media communities”.

Mimi had the opportunity to talk to MPs students and academics from participating universities across the UK.

Matthew Dray, BSc (Hons) Computing student, presented his research on IoT (The Internet of Things)-Enabled Landslide Monitoring System. Matt offers up an innovative landslide monitoring system that combines state-of-the art IoT and data analytics and an intuitive front-end interface, with the main emphasis of his work on the latter. In collaboration with Bournemouth Borough Council, a pilot of the system has been deployed at the site of the East Cliff landslide. Matt says: “the system was able to provide local authorities with a new means of efficient and remote monitoring, whilst also being a cost effective solution”.  Speaking about taking part in Posters in Parliament, Matt said: “It was an amazing experience to be part of and an honour to co-represent BU”.

Posters in Parliament is the precursor event to the national BCUR 2019 conference on 15-16 April, this year being held at University of South Wales, where a number of BU students across all faculties are due to present and share their leading research.