How Will Emerging Economies Reliant on Tourism Survive the Crisis? 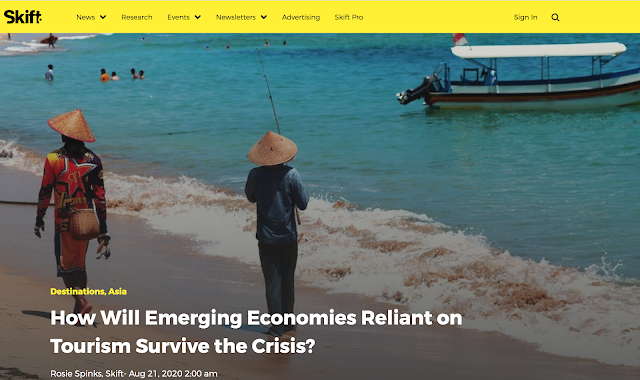 Dimitrios Buhalis, a professor of tourism at Bournemouth University, told Skift that countries which can temporarily divert their tourism workforce to other industries, such as to agriculture or fishing, may be able to weather the storm and see their tourism economies pick up where they left off, eventually. He pointed to the example of Bali, Indonesia, where the tourism workforce has largely shifted to more traditional economic means — certainly not without hardship.

But, Buhalis said, “where it’s more difficult is where tourism is 60, 70, 80 percent of the local economy and where you don’t have a local domestic market. Places where the country is small, geography does not support easy accessibility, and the social classes are very structured.” He noted that some Greek islands and countries such as the Maldives fall into this category.

Conversely, Buhalis said the emerging markets that will fare the best during Covid are those that have a large domestic population, an income distribution which means a sizeable percentage of locals can afford to travel, and the geography and infrastructure that allows them to do so.

Though he believes that tourism will recover — “we’ve seen how many people are desperate to travel” — he thinks the current moment represents something of a “fallow period” for tourism, one where governments who have already invested in tourism economies should continue to build up infrastructure and make industries more efficient for what he sees as tourism’s inevitable return.

“Apart from the health crisis we’re about to experience a major global recession beyond belief and that will damage tourism and will create a range of initiatives to prepare us for the next day,” Buhalis said. “We need to improve efficiency and we need to improve the way that we manage tourism.”