Beyond the Beach: Why I Chose Bournemouth University 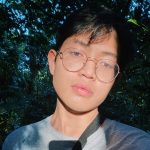 It was December 2018 and my UCAS applications were fast approaching. I was 17 years old passing through the stressful senior life of high school. But I was not going to let the troubles I faced then to have a consequence of my future now.

A few years prior, my sisters began their path of university to the UK and naturally, I followed with. Whilst attending an American International School in Saudi Arabia, the distance to England and the English-speaking language seemed easiest to adapt to. So, I narrowed in on applying to the UK.

Time was of the essence and I had to figure out where I wanted to go and what I wanted to do. My strengths fall on the subjects of English and Art. Therefore, I settled with a course that would either be one or the other. At first, I chose mass communications, but my mother thought it to be too vast of a choice and instructed me to narrow it down. So, my search ran deeper until I found courses in Journalism that could offer me a blend of English and Art.

Five universities were applied to by the end of January. Two rejections and some patience gave me three options. One of which included Bournemouth University. Of course, my research prior to applying focused on the BA (Hons) Multimedia Journalism course and merely grazed over the beach and the modern SUBU building.

Bournemouth University was able to offer me a place where I could practice Journalistic skills under varying media styles, entrusts me with fulfilling a placement, and could award me with a degree paired with the National Council for Training of Journalists certification. No other universities I have gotten accepted into could give me this option. It gave me a light for a future beyond my university experience.

The education I was going to receive motivated my firm choice in BU. The course I chose focuses heavily on theory and practical. The best part of it is, once you are part of the course: you are a journalist. Moreover, the university itself gives a wide range of extracurriculars with its clubs and societies as well as varying events that the university SUBU hosts.

I have only attended BU for one semester and already I had physically gone out to find stories, interviews, and was firmly educated in journalistic practice and principles. I was also able to partake in the UK General Election 2019 coverage, attended a BBC Young Reporter’s event, become a student ambassador, and host my own radio show.

It doesn’t stop there. The university extends its hand to be adapting to my background and needs as well. Being Muslim and having halal lunch options and a Faith and Reflection area for prayers is quite accommodating. Additionally, having a medical center on campus that holds deep values in student wellbeing and mental health ensures my safety and comfort within my environment.

The beach, shopping areas, activities, and overall surface of Bournemouth are the main figures we see upon coming here. Although, the sense of community, the internal and external support during and after my course, the close guidance by my lecturers, and the overwhelming opportunities BU provides are some of the main reasons why I am content in my choice.

One year ago, it was difficult for me to determine my future. However, Bournemouth University gives me hope in setting the next steps towards the rest of my life.