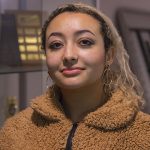 Within this year I have been lucky enough to be able to explore various cities within the UK and the surrounding areas. Also, after making friends with a Tourism student, I was able to aid her in her research of the UK. I even joined her to explore Bournemouth’s local history, much of which can be found in the local library in Bournemouth town centre.

In my first year, I took advantage of the offers that SUBU provided to travel to major cities like Oxford, Bath, London, and also sights like Stonehenge. After the initial tours, they allowed us to roam free and that was where the real fun began! My friends and I would look up all the local museums, cathedrals, and historical sights that the cities contained. One that really stuck out for me was the city of Bath where the Romans left their identity and of course, their bathing culture and ruins. We took the liberty of taking the walking tour, and I drank the water streaming through the baths. I had no idea that the Romans left such an impact on the UK from their time here. After a busy day of sightseeing, there are countless Pubs that are hundreds of years old and are still run to this day, in the same location. Naturally I had to go in for a pint, for the historical significance, of course. I also loved visiting Oxford, especially with their association to Harry Potter within the grounds of their prized University. I took a walking tour where they displayed the scenery and locations where the films were shot.

For the April break, I took advantage of my location to visit Gibraltar, a UK territory still held on the southern tip of Spain. While there, I learned many facts about the UK’s role in World War II and I even walked in the original tunnels of the soldiers’ homely abode, and their guns still remain today, marking the history of Britain’s victory. However, nowadays the new renovation of the territory is covering the last remains of the old ruins with new housing plans to accommodate the increasing population. To my surprise, the English and Spaniards residing there live in harmony and identify as Gibraltarians rather than their backgrounds alone. Recent elections found that the Gibraltarians would prefer to remain part of the UK than Spain, and would like to maintain their currency of the pound sterling. However, they do accept the Euro as well, but it’s more expensive as they tend to drive up the prices.

When scavenging the local library in search of local history and old news articles in their archives, I made some interesting discoveries with my friend studying Tourism, as part of her research project. A fact that surprised me is that the Royal Bath Hotel on the seafront has far more cultural significance than I initially thought. Many years ago, the Queen herself would stay there during her frequent visits to Bournemouth, as it was one of the first and most significantly classy hotels in town. I also hadn’t really considered the fact that Bournemouth was very much involved in World War II, and it was bombed and raided from 1940-1944. During this time period, the local children had to be evacuated to nearby Southampton for safety.

To conclude, I have taken the opportunity to travel a lot during my time in Bournemouth. I’ve experienced regions and territories that have played a pivotal role in British history, while also immersing myself in the culture while I study here. Most of the places we frequent have an amazing, underlying historical value and I’m glad that I was able to reach out and experience them.