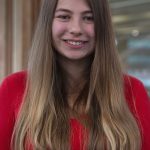 My name is Jenny and I’m a first year Scriptwriting student at Bournemouth University. In this blog I will talk about my experiences with this course and I hope you’ll enjoy.

Why did I decide to study Scriptwriting at BU?

I knew I wanted to study Scriptwriting because I love writing and I love watching TV series, so it seemed like the perfect combination. In my home country, Germany, it would have been rather difficult to study this course right after I had finished school, so I looked at opportunities in England and found Bournemouth University. I went to an Open Day and really liked it, so I decided to try my luck there and was very happy when I finally got my unconditional offer!

Units and projects in the first year

Both semesters consist of three different units each. There are no exams, which I think is great, as it means that we don’t have to go through revision stress on top of deadlines for our projects. In both semesters, we had one rather theory-driven unit which was annoying at times but still very useful to figure out academic elements of the course, like how to reference and write good academic essays. In the first semester, we learned how to read scripts and give constructive feedback. We also got to write our first short script and had to give a presentation on this. In the second semester, we were put into groups and produced a selection of scripts written in the previous semester. We also got to explore new areas of writing, like radio and theatre scripts.

I really like most of the lecturers. They’ve worked in the industry themselves and can therefore really help when it comes to writing or answering any questions we might have. Another thing I really enjoyed is that we don’t only get to learn how to write scripts, but also we are given the opportunity to look into other production roles. For example, we had camera and editing workshops. At BU, it is possible to take a sandwich year on many courses, and Scriptwriting is one of them. This means that during what would be our third year at university, we can do a 30-week work placement and return to uni afterwards. I think this is amazing as it allows us to get a glimpse into what the real world outside university is really like.

Is there anything I expected to be different?

I thought that we would be doing more scriptwriting, but because this is our first year they introduced everything to us first and we only got to write a few scripts for the course itself. However, the lecturers strongly recommend for us to use our free time writing and the course definitely gives us the freedom to do so.

All in all, I can recommend this course to anyone who would like to pursue a career in Scriptwriting or film in general, since we learn about so many different aspects of the industry.