A once in a lifetime celebration: The Queen’s Platinum Jubilee 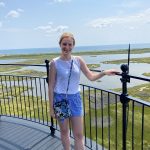 Produced by Emily
from United States 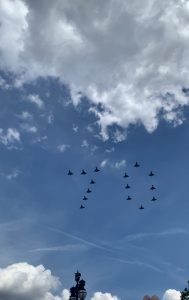 This year marks the 70th year that Queen Elizabeth II has ruled as monarch in the UK, making this the Queen’s Platinum year. This is the first time in history that a monarch has reached this milestone and ever since I found out that I had been accepted to Bournemouth, I knew it was something I had to go to. The royal family is an intriguing and foreign concept that has been of great personal interest over the years. I had always wanted to attend the trooping the colour parade but to be able to attend the Platinum Jubilee was a once in a lifetime opportunity. 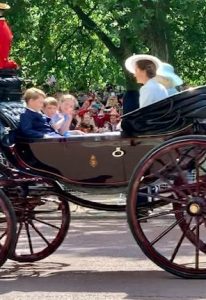 The trooping the colour parade started off the weekend of celebrations and was a royal fans’ best opportunity to see members of the royal family. I woke early in the morning and was standing at my spot along the mall by 5:30 am. Being at the event so early was tiring, but I was right up against the barriers ready for the parade to start. The mall was a bustling full of activity and preparations for the parade. People were dressed in red, white and blue with flags waving everywhere all competing for the best view.  Once the parade started, your senses were overwhelmed with the colors of the military uniforms, the sounds of both men and horses marching and the music of the military bands. I waited with anticipation for the royal carriages to arrive, listening for cheers further up the route to signal their approach. As the royal carriages approached, the anticipation from the crowd boiled over. People were overjoyed with the arrival of the Duchess of Cornwall, the Duchess of Cambridge and the Cambridge children in the lead carriage. At the end of the parade, the crowds flooded the walkways looking for an opening to walk up to the palace. As an entrance was finally found to walk onto the mall, I found that being by myself allowed me to easily maneuver through the crowds up to the stage in front of the palace. Cheers erupted at the Queen appeared on the balcony with her family. The fly over brought an array of aircraft with the finale with aircraft making a 70 and the red, white and blue streaks painted across the sky. 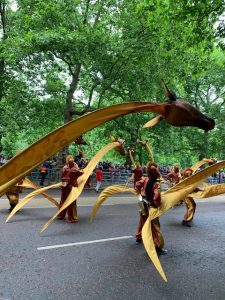 royal carriage used in the Queen’s coronation. The pageant showcased the decades under the Queen’s reign with music and celebrities from that decade. Exotic costumes, dancing and music filled the pageant with excitement at every turn. The afternoon event made for a great end to the Queen’s Platinum Jubilee celebration and the end to an unforgettable experience.