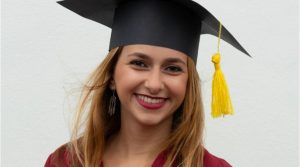 Barbara struck gold with the ScreenSkills Select-endorsed Computer Animation Technical Arts degree as it not only combined all her favourite subjects – maths, arts and computer science – but was also the perfect stepping-stone into the industry. Here she shares some of her experiences.

I knew the university had a great reputation for animation and my lecturer pointed out that a lot of people in the British film industry who went to university attended Bournemouth, plus the fact it was a ScreenSkills Select course gave it even more credibility.

On the course, we were given a flavour of everything, including modelling, effects, life drawing and programming in the first year, which helped us decide which we’re most interested in and what we’d like to specialise in.

Being able to work on each step really helped us understand the pipeline and how it all works. Each week we would learn and work on a different stage, with workshops, tutorial videos, and feedback sessions.

The lecturers were like mentors. They were very knowledgeable in their fields and they were always helpful and willing to have one-to-one’s whenever we needed help. The course also has a number of demonstrators, who are basically staff that assist in the workshops and with any problems the students have with their work, which is vital as it’s common in computer graphics for things to sometimes go wrong.

Every Friday we had visitor speakers from the industry come to the university to do a talk and that’s always a good opportunity to make contacts and network. And there’s also the BFX Festival, which is a visual effects, computer games and animation festival that happens every year at Bournemouth with talks from industry professionals, masterclasses and a recruitment fair at the end. All these events really help to network, get feedback on your showreel, make contacts etc.

I completed my degree [with first-class honours] and MPC (Moving Picture Company) contacted me offering an interview. It went well and I was offered the job as an FX artist. I now create photo-realistic effects, such as fire, explosions, water and destruction on TV series for the likes of Amazon Prime, BBC and Netflix.

I’ve always been more of a technical person than an artistic one, but I always liked a middle ground between the two and this course specifically offered that. The technical units I did, such as maths and programming, have been really beneficial to me as I use those skills on a daily basis at my job as an FX artist. Not all animation jobs require technical skills, but having basic coding skills is a nice extra selling point.