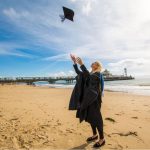 Produced by Abhineetam
from India

Coming to Bournemouth University from a small town of Shimla, which lies in the foothills of the India-Himalayan Region, is one of the biggest steps I have taken in my life. This journey didn’t happen all at once. I had a series of small steps and friends all across the way that helped make it possible. The second biggest step was when I went to Bangalore for three years to pursue my Undergrad. During that time I stayed connected with my high school friends via phone calls. As I made new friends, my social circle grew slightly bigger. I had three housemates while was in Bangalore and at the time of writing this, all of them are in different corners of the world. Calling and video conferencing has always been a weekly event for us even before the pandemic. All of us check up on each other and make sure we stay connected in all phases of life, good or bad. Before coming to BU, I had just a handful of friends, few from my home town and a few from my undergraduate studies, safe to say all Indian.

The day I entered BU, I made my first international friend, who is from the UK itself. As university days began, I began to know more and more people from all parts of the world. It is kind of surreal how technology has connected us. On the very second day of uni, I received a group invite that had all the animation students in it from our course. Someone had asked if any of the fellow students interested in a pre-class meet up at the Fusion Building and I said I would. Similarly, a lot of other people said yes as well and we all came together. We had people from China, America, the UK, Greece, Switzerland, Korea, and India who had become friends even before any of us were officially introduced to each other. Later seeing familiar faces in the lab on the next day (officially first) made is so much easier and I believe it was the same for others.

Later we had a random sitting shuffle that made it possible for even more interaction and I got to know more about my fellow batch mates. Almost a week later we had our International Dinner which helped bring together everyone under the same roof. Random sitting helped me interact with an exchange student from Germany and coincidently my fellow classmates from The Czech Republic, one of whom now holds a dear place in my life. By the end, coming back, I also met my neighbor who is as luck would have it, an international student from Portugal and an animation student. Later BFX Festival gave way to even more long-lasting networks, some of whom now critic my artworks regularly on Instagram. I met my friend from South Korea in the BFX festival who is like an elder sister to me now. In such a short time, assignments like Group Projects, Common Lectures, and even pre-organized meetup at Dylan’s played a huge role in making my life at BU, as fun as ever. Not to mention the friendships I have made by being a Student Ambassador. I got to work with and learn from so many other ambassadors. I even became friends with another student ambassador solely because we decided to do a project together.

These opportunities also helped me build connections with people from all walks of life and I will always cherish them. A kid who came to an unknown country without any expectations of friendships is living with bonds that will last a lifetime and beyond. I will forever be grateful for it.

I wish you a very Happy Friendship Day!