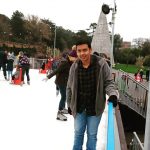 Bournemouth is a resort town located in Dorset. It is situated in the south of England and is well-connected to London by road or train. The main highlight of this amazing town is the mixture of different cultures, and the town attracts tourists from all around the world. Bournemouth also has its own international airport which connects to a handful of destinations around Europe.

The weather in Bournemouth is very similar to other towns and cities in the United Kingdom.  The daylight hours are shorter during the winter and it can get quite cold. There are chances of heavy rainfall during this time of year and a slight chance of snowfall. However, this has been a rare occurrence, but over the past year (2019), the heaviest snowfall was recorded in March. This was also observed at the end of January, and the Met Office sent out a warning about extreme weather conditions.

As the spring season proceeds, there is a sudden change in the weather and daylight hours are a little longer, but there are still chances of hail and rainfall. There are flowers and greenery blooming all around Bournemouth in this season and it is a sight to behold.

A lot of activities take place during the summer season in Bournemouth, and the majority of the locals tend to spend time on the beach during this weather. The daylight hours are much longer during this time and the sun sets very late in the evening. We get to see a different set of colours emerging all over the town and but every now and again there are still some rainy showers!

There are many amazing places to check out in and around Bournemouth. The main highlight in my opinion is Bournemouth Pier, situated on the beach, and it is the main hub for activities like fishing and various other watersports. Apart from the pier, spending time in the nearby town of Swanage or the world-famous Sandbanks beach is a treat for tourists who are looking to spend time in beautiful places or doing various camping activities.

Bournemouth was the favourite holiday spot for Prime Minister Sir Winston Churchill who used to come down here during the summers of his teenage years. Famous writer Robert Louis Stevenson, known for his works like the Treasure Island and Kidnapped also found his inspiration for these stories in Westbourne, a residential area of Bournemouth.

Two of the other things that attract tourists to Dorset are the Jurassic Coast and Corfe Castle. The Jurassic Coast is well-known for its amazing scenic locales like Durdle Door, and it’s also a UNESCO World Heritage Site. Meanwhile, Corfe Castle gives a peek into the centuries-old history of Dorset and provides an amazing panoramic view of the countryside.

Bournemouth also happens to be the home of the local Premier League football club AFC Bournemouth. Their ground, Vitality Stadium, is located in Boscombe, a short journey from the town centre. Apart from football, the UK’s largest air festival is held in Bournemouth every year, and it is a major event with lots of different attractions like live music and aerial displays bringing in a massive crowd.

To conclude, Bournemouth is a place full of a whole host of exciting things to do and see, and you should definitely pay a visit if you’re looking to inject some colour and vibrancy into your life!