Is that a Merit or a Distinction? Comparison of Turkish and English grading systems 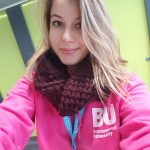 Written by Talya
from Turkey

Hi guys. I’m Talya and I am currently completing my master’s degree in Clinical Psychology here at BU. Today, I will give you a brief summary of the main differences between the Turkish and the English grading systems.

Coming from Turkey, it might take a while to adapt to a new grading system. In Turkey, you are graded out of 100, for primary, secondary at higher education. Although we are graded out of 100, we still use a letter system to be logged in to our transcript. This is an American system, but it also works for Turkey. However, keep in mind that the letters and the GPA is out of context in the UK. For example, if you get 65, it’s not a DC, it’s a merit. A 65 would not sound very great for the Turkish grading system but it is quite a good grade in the UK.

While adapting to the new system, it’s always a good idea to ask home students about the grading criteria. Make sure you read the assignment brief for each piece of coursework to make sure you’re on the right path for the preparation and the whole process of completing the assignment. A mark of 60 to 69 is considered as an upper-second, which is equivalent to our B in Turkey, whereas 70 and above is equal to an A. If you get above 80, that means it’s a remarkable piece of work that is publishable by one of the professional bodies relevant to your field.

When I first arrived and got a 65, I was very disappointed as I had never received a 65 before in my entire education. Being a perfectionist makes you want to push the limits and get all the best grades. However, after receiving a 65 and being tormented by it, I spoke to my classmates. I’ve been told that if you get over 80 in the UK, that’s a very big achievement. In fact, I learnt that 65 doesn’t mean a DC and is actually a B, which is a merit in the UK.

My advice would be to familiarise yourself with the grading system in the UK before panicking and working yourself up. Talk to the lecturers to clear your mind. Always check the handbook provided by your course leader at the beginning of the semester. At the end of the coursebook, you will find everything you need to know about the grading system in the UK. It’s a process but you will get there eventually, and we’ve all been there!