Developing treatment for diabetes as a placement student

Guest blogger, Zayd Lakhi is a final year student studying BSc (Hons) Biomedical Science. During his placement year, he had the opportunity to work at Imperial College London on a project researching weight loss treatment for those with diabetes. 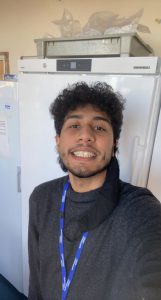 Last year I joined a team as a laboratory technician for Imperial College London’s Investigative Medicine branch, working on weight loss treatments for diabetes/obesity. It’s a unique place to work, as it’s a biotechnology company operating from within a university. When I started, my role was to be a helping hand for colleagues. Over time, I have been able to help the team in more concrete ways with my own research. In December, I developed an alternative assessment for detecting fibrils (toxic, insoluble proteins which cause death of cell tissue) from scratch, an important aspect of drug development evaluation. Alongside evaluation, I am given projects by senior team members to specialise in as I go, as well as the opportunity to work on my own research.

A big challenge I dealt with is being taken seriously as a student coming to them on placement. It was daunting initially, but I was thankfully able to integrate myself and feel like part of the team. What helped was being insistent on wanting to learn and treating everything as a learning opportunity. Despite this, keeping up with my co-workers’ level of knowledge is something I still deal with. Whilst this has lessened significantly as I approach 6 months with the team, I would read a scientific paper daily to fill in the gaps between what I knew and what my co-workers were effortlessly speaking about when I began.

Initiative is key in a fast moving environment and as a student on placement, that is easily forgotten. I spent my first month pestering co-workers for work and further reading on topics being discussed. I wanted to show that I could also be an asset to the team; and to me this means being able to measure up to my peers intellectually. Additionally, the general skills I have picked up have strongly made a difference in my strength as a biomedical scientist. Working with the team I am in has given me the opportunity to learn mannerisms and the scientific process in a real setting, and it’s something I hope everyone on a placement gets to do.

In terms of future thinking, my goal is to start a biotechnology company, hopefully in the field of RNA therapeutics (gene editing technology capable of silencing faulty genes, which has the 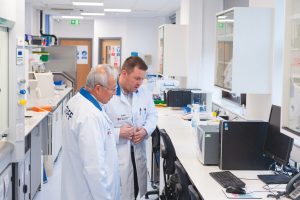 potential to cure genetic disease). This placement has undoubtedly helped me towards that goal, in both skills and opportunity. In shorter term thinking, I want to start a PhD after my Bachelors, within the field of protein therapeutics, ideally RNA therapy. I think I still have a ways to go as a biomedical scientist, and a PhD is the perfect way to improve my skills, as well as hopefully giving me access to more cutting edge research.

To be a biomedical scientist, you need to be curious. You need to constantly ask questions to try and get to the root cause of things you don’t understand, as without that curiosity you might not be thinking broad enough to get the answers you need. If that intellectual pursuit and challenge interests you, you would be well suited to studying biomedical sciences.