This guest blog  has been written by James Pilbeam, a final year BSc (Hons) Paramedic Science student. He talks about life as a student at BU as well as his experience of the facilities and placements whilst studying and where next after graduation. 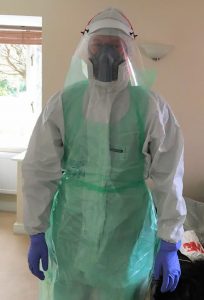 Well, COVID has meant that it certainly has not been a conventional degree, but then again Paramedic Science was never going to be. My time at Bournemouth University has been brilliant right from the start and – as cringey as it sounds – is shaping me into a paramedic who is confident and ready for the world of work: saving lives, delivering babies, going to major traumas, and caring for elderly patients.

Moving over three-hours’ drive away from Leicester, fresh out of A-levels and with a freezer bag of frozen meals from my Mum was incredibly exciting, not least because I could see the sea from my bedroom. Bournemouth is a town full of things to do, and if the draw of the pristine beaches isn’t enough, then look no further than the countless Wetherspoons and nightclubs where I have spent many a night with mates having a few too many drinks, fitting the student stereotype perfectly. 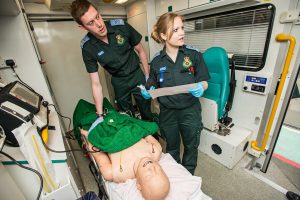 The course has been amazing, everything that I was hoping that it would be and more. The facilities were one of my reservations about choosing Bournemouth University but since migrating to the Bournemouth Gateway Building with the very welcomed air-conditioned rooms and kitted out simulation ambulance, I’d argue that the facilities are some of the best around. The lecturers have been engaging, entertaining and responsive to emails, something we have all been grateful for as essay deadlines loom.

I completed my placement with South Central Ambulance Service and have had a great time. Whilst I haven’t been to lots of massive jobs like Casualty and Holby City promised, COVID has certainly added another aspect to pre-hospital care, not least the PPE. The paramedics have been incredibly friendly, facilitating and have encouraged me no end and since working on emergency ambulances in Southampton, my eyes have certainly been opened to the lives that some people live.

As my time at BU comes to an end, I am incredibly excited to start my career as a paramedic, shaped by my time over the past three years as a BU student. Not only through the excellent teaching but also through all the life experience that I have gained, I wish I could say the same for my surfing ability. In the long run, I would love to pursue a career in critical care but also join response teams going to aid countries immediately after a disaster.

My biggest advice to anyone who is considering a career as a paramedic would be to get confident talking to people. Our job is all about talking, whether talking someone down from a multi-storey car park, telling someone that their daughter has passed away or debating who does the best meal deals with your crewmate, communication is key and is something which can’t be taught.