This is a guest blog by Maddy Higgs, a final year MDes Product Design student. Maddy won a competition through the Bee Friendly Trust to create a unique sculpture to raise public awareness of the decline in the honey bee and pollinator population.

I’m a product design student just about to go into my final year after having my placement year during Covid. In January, during yet another lockdown while I was home schooling my younger sister I entered a competition run by the Bee Friendly Trust https://beefriendlytrust.org/ an amazing charity that is focused on slowing the rapid decline in bee population. The idea behind the competition was to bring awareness to the general public about how limited time is for bees, it was specified in their brief that they wanted the sculpture to have at least one moving part and include recycled materials in its construction. Having previously worked with national rail on a number of occasions it was also agreed the sculpture would be erected in London Bridge Station where it would receive ample interest and attention from the high daily footfall.

The key message: Running out of Time 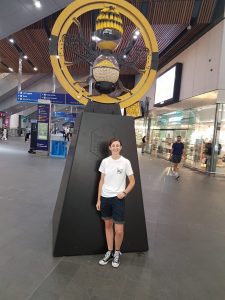 Maddy and her sculpture

My design was based on an hourglass that was incorporated into the bee’s abdomen, to represent the ‘running out of time’ message. I included recycled corks and aluminium cans in order to fit the recycling element of the brief and I also considered the overall environmental impact of each material element involved in my design. My initial entry had the bee ceiling suspended but after design development and a few concerns from NR, that idea was adapted so that the final installation was floor standing.

Once I had received the news that I had won the competition and prize money, I worked with the Bee Friendly Trust to develop the design and figure out how it could be manufactured in a way that would have a minimal impact on the environment; but also be strong enough to withstand the stresses of being homed in the middle of a busy station.

Once we had a strong design I created a CAD model, technical drawings, and supporting documents outlining material information and we passed all of this onto Amalgam, an amazing model making company based in Bristol who were ultimately the builders of the sculpture. 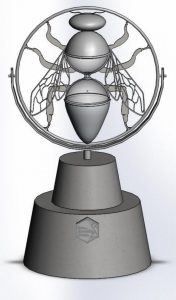 One of the project sponsors was an environmentally conscious company called The Uncommon, who sell wine in aluminium cans; they started a scheme whereby they asked their customers to send back their empty cans when they had finished with them, and amazingly most of them came back… Some of these cans were then used to experiment with by both me and Amalgam, and then finally create the bee’s abdomen.

The whole process has been an amazing experience especially where I haven’t yet finished my degree. I also enjoyed the Projects and Prototypes modules and the Design Media unit.

Ultimately I have been able to apply the varied skills I have developed while at university and support a project that I’m really proud of.