This is a guest blog by Natasha Billson, who graduated with a BSc (Hons) Archaeology at Bournemouth University in 2013. Since then she has worked across the world as a Field Archaeologist and TV Presenter on the Discovery/Science Channel and Channel 4’s The Great British Dig: History in Your Garden. 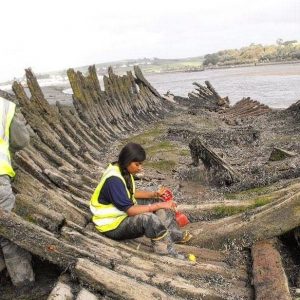 When I look back at my time at Bournemouth University, I am grateful for the opportunities presented to me both on the syllabus and extracurricular by my lecturers. My fondest memories would have to be the invaluable field experience I gained over the three years. My first archaeological excavation was a Middle Iron Age banjo enclosure on the Durotriges Project run by Dr Miles Russell and Paul Cheetham. I participated on Maritime projects run by Prof. Dave Parham and worked in Germany on a Mesolithic long-barrow run by Prof. Timothy Darvill. 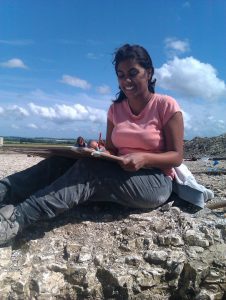 Natasha at a BU Field School

The Archaeology department found a way to not only instil the theoretical knowledge but to utilise that in the field. Having the opportunity to combine both the practical and theoretical skills, led me to participate in excavations in Barbados, Cyprus, Germany and Russia, within the first year of graduating.

The beginning of my career as a Field Archaeologist

My love of field excavation led to a career in commercial field archaeology and later TV. However it was not an easy journey. It took a year of short-term contracts ranging from two weeks to one month with companies across the UK, to land my dream job at an urban-based archaeological company in London. Working in the city has varied from large infrastructure projects to monitoring works on a construction site. It has been both a challenging and rewarding experience. 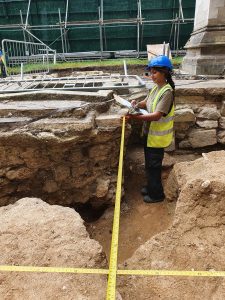 Since 2014, whilst working as a Field Archaeologist, I used up my annual leave and unpaid leave allowance to participate in expeditions in Egypt, Russia and Ukraine. During this time, I found a love for communicating the past. In 2016, when work started to slow-down in London, I took an Internship with Past Preservers. A company which worked on TV development and research, and provided a database of experts for TV programmes. At the same time, I applied to be a native English voice-over artist for a Ukrainian broadcaster which later transformed into a TV presenter position. In 2019, I established a relationship with the Discovery/Science Channel after my appearance on Unexplained and Unexplored. Later I worked on Secrets in the Ice and Ancient Unexplained Files.

In 2020, when lockdown measures were implemented, I created a YouTube Live show called  ‘Archaeologists in Quarantine’ on my channel Behind the Trowel. Here we have interviewed over 50 archaeologists across the world, hosted webinars and lectures. My social media presence and previous TV experiences were noted by the producers of Channel 4’s The Great British Dig: History in Your Garden. 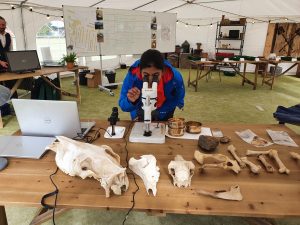 Throughout the pandemic, commercial archaeology did not stop. The same applied for making TV. We began shooting The Great British Dig in the autumn of 2020. We all had to change the way we would approach a community-based project. Every excavation featured in the show had research questions to answer, as an ordinary archaeological project. The beauty of public archaeology is the interactions we archaeologists have with the local community. And to see how people of all walks of life connect over the same awe and desire to know more about their local history. 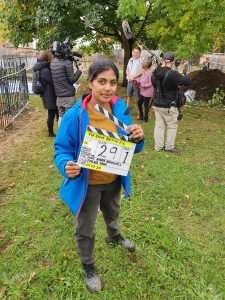 Now, I have combined my passion for communicating the past with content creation. So when I am not in the trenches or in front of the camera, you will find me working at Heritage Media Group, an organisation I co-founded with my husband, Oleksandr Dmytriiev. The company aims to bridge the gap between heritage organisations and individuals, with social media management, video production and training.