My experiences on BSc (Hons) Archaeological and Forensic Sciences

It’s best if I start off by introducing myself, I’m Luke Gent and I’ve recently graduated from BSc (Hons) Archaeological and Forensic Sciences and I’m going onto my MRes.

What drew me towards BU for this area is its plethora of opportunities regarding the AFS department as well as what skills I could learn, nurture and develop whilst studying here for my BSc. Straight away at the end of the first academic year myself and fellow AFS students became apart of the 2016 ‘Durotriges Big Dig’ Field School; this was an enriching 4 weeks where regardless of whether a student had never picked up a trowel before or if they had an abundance of excavation experience, everyone could learn something new. I believe and have to get off my chest that Bournemouth University has been the best opportunity for starting my desired career in Archaeological, Anthropology and Forensic Sciences!

This is where I first got the taste to excavate and increase my interest in the investigation and reconstruction of a scene (Archaeological and Forensic based!). Shortly afterwards I was able to be a part of a team to excavating the Giants Grave Neolithic chambered cairn on Islay on behalf of Reading and Bournemouth University that summer. It was a brave new opportunity that I dived straight into, I was able to expand my excavation style, find out more about the joys of excavating in the rain and learn about the big history of a small island.

The second academic year was double the difficulty however it was also double the excitement! I found this year very important as it was the chance to apply the skills taught in first year in a practical sense, this conducted within the Crime Scene reconstruction and analysis at BU’s own Trigon site and Streetwise warehouse.

My Summer was with Grampus Heritage taking part in a PEATS (Placements in Environmental, Archaeological and Traditional Skills) Archaeology placement! Already there was a lot of choice to which excavation I could become a part of, I settled on working in Bulgaria for Grampus. My time over there was split between working in Troyan’s Museum of Folk Craft & Applied Arts, Kramolin Village and excavating at Hotalich Fortress’s East Church Graveyard in Sevlievo. I wanted to learn more about how artefacts are cleaned, recorded and organised in a Museum and definitely to improve upon my excavation skills specific to excavating human remains. This fuelled my passion for anatomy, osteology and how burial practices differ across various cultures!

This passion carried on into my  final year of my BSc as the option units provided on the course allowed me to really specialise in my area of interest. Specifically, during my dissertation (another intense part of my BSc) I realised I particularly found an interest in the physical changes that occur to the human body during burial, this was the spark that led to my dissertation project. Of which I was given a lot of independence and support regarding my fieldwork experiment from the AFS staff at BU. All of this passion led to me being apart of another PEATS placement for Grampus Heritage, this time in Alba Iulia, Romania. I chose to do a placement here because of the wonderful and rich prehistoric archaeological history. I was explicitly interested in their previous excavations at Lumea Noua that revealed an unorthodox set of multiple burial practices discovered among the Neolithic and Eneolithic groups in the area (not forgetting the previous discovery of approximately 120 disarticulated individuals!).

The objective of this placement was to be in a team working with the archaeologists from 1 Decembrie 1918 University on a rescue excavation to further discover insight into the cultures found in Lumea Nouă previously. We were able to learn more about said cultures (Vinča, Starčevo–Criş, Lumea and Foeni) through the ceramic findings and the remains found on site. Although the number of remains were much fewer than previous years, I was still able to utilise the osteological and anatomy skills I learnt from my BSc for the remains that were present.

Beyond my degree I have taken upon myself to start a Master’s by Research (MRes) at BU, to investigate my interests of the biological and chemical processes behind the physical changes to human bone trauma in a buried context. This isn’t possible without the support I’ve had at BU from the AFS department as well as friends and family. This new degree I’ll be embarking upon will be the correct pathway for me to apply myself more in the field of research, to one day hopefully start and obtain a PhD. 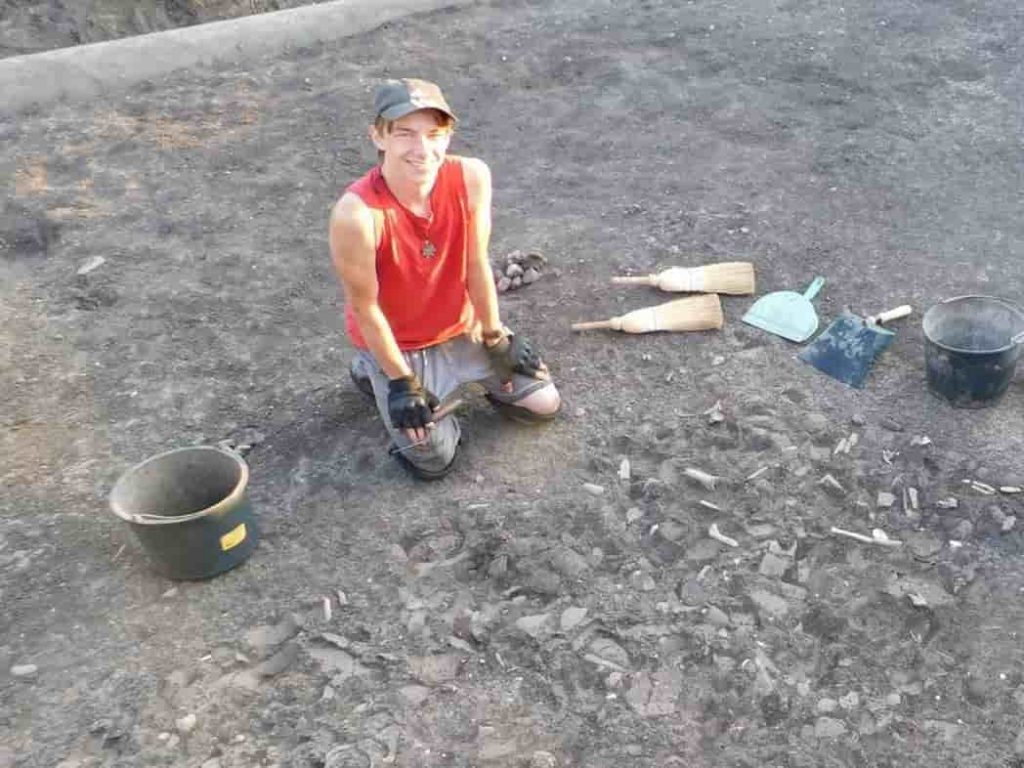