Materialising my ambitions at Bournemouth University 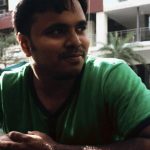 Hi everyone, my name is Ram Anand, and today I want to talk a little about my favourite project during my time at Bournemouth University.

As I am an MA Directing Film and Television student, my course is designed and evaluated based on the films that we direct in collaboration with other students who are studying a variety of courses in the same Media Production framework, including the producers, sound designers, cinematographers and editors, to name a few.

Choice to make a film in new territories

My favourite project has to be the project that I am currently undertaking, which involves making a short film as my Master’s project, in India.

After making two short films in the United Kingdom with my class and coursemates, I was allowed the opportunity to pursue my graduation project in a different country and continent, on the condition that I would be able to independently pull together the resources required to make a film. Spurred on by the possibility of filming in a completely new country and the adventure it would bring, I helped some of my classmates in developing and filming their projects, before pursuing my own undertaking abroad.

Making a film in a new country with so few contacts has not been easy by any stretch of imagination, but I believe filmmakers need to be able to operate and understand different environments in order to find their own voice, and I am glad that Bournemouth University and my lecturers provided me with the necessary impetus, freedom and feedback to pursue my ambitions with supervision.

Starting out in a new country

I got to India with a script, a rough image of the visual look of the film, and a small budget. I did not have friends in the film industry per se, except for an individual referred to me by a mutual friend.

The whole act was a leap faith, and so far the rewards have been fantastic. I have learnt so much about one of the largest film industries in the world, met and communicated with many people already making headway in the industry, and managed to convince some relatively experienced artists and technicians to work on my film.

While the film itself is yet to be complete, I believe that I have come very far in the process of making my ambitions materialise, and the lessons I have learnt and will continue to learn over the coming month will be extremely valuable for me as a filmmaker, a writer and also a global citizen.