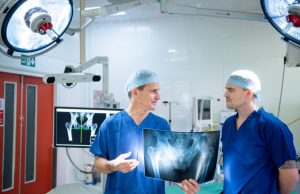 In the next few years, it is expected that most hip replacements will be assisted by robots. ORI continues to support this major advance in medical science by carrying out research and training surgeons.

Professor Middleton explains further: “Understandably, some people have concerns over robots. We have all read about driverless cars s in the newspapers losing control and crashing. Could this happen with the Mako robot? The answer is no. 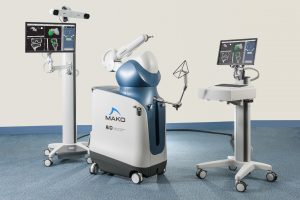 This is because the robot does not perform a part of the operation; it is still done entirely by the surgeon. Instead the robot assists the surgeon by confirming they are putting the hip replacement in exactly the right place and minimising the risk human error. This is called Active-Constraint. If the robot were to break down, the operation would not be affected, as the surgeon could place the implant in the standard way. In addition, the implants used are not new and untested. They have some of the best long term results of any hip and have the highest rating in the UK, 10A*.”

A CT scan is performed before the operation.

The CT scan is used to generate a 3D model of the hip joint.  This computer model is then used to plan the perfect position of the hip replacement.  Once the plan is confirmed it is then loaded into the robot. 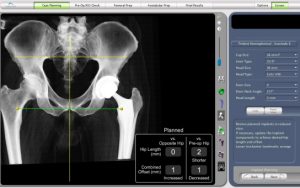 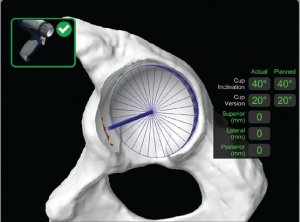 Stage 3: Planning of the hip replacement

The 3D model of the hip joint is used to plan the ideal position for the hip replacement.

Stage 4: Navigation and matching of the patient’s hip to the 3D Model

At the start of the operation, when the patient is asleep, three small, 1cm, incisions are made on the top edge of the bony pelvis.  The robot uses a system similar to that of the GPS satellite navigation in your mobile phone to work out where the body is. During the operation the surgeon uses a pointer instrument with tracker balls on to identify key landmarks on the hip joint to confirm the robot knows exactly where the hip is. This matches the 3D computer model exactly to the patient’s real hip. 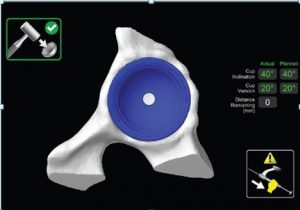 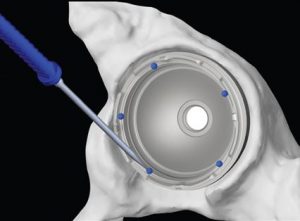 Stage 5: Inserting of the hip replacement 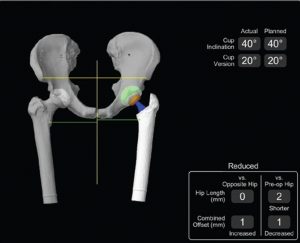 Donate to us with