My impact on a patient’s care that sticks with me

Since becoming a registered nurse in 2020 I am much more aware that my actions have a direct impact on an individual’s care of which the consequences, positive or negative, can be long lasting.

There is one scenario that sticks with me that occurred when I was covering the discharge co-ordinator role, prior to the second wave of Covid-19. The individual concerned was an elderly lady, who had been admitted with a fracture to her hip which had been surgically fixed and was making a very good physical recovery. The patient was usually active and lived with her husband, who was her main carer due to her having advanced stages of dementia. The only other relative she had was her daughter who was based in the North of England. Throughout her admission there was close co 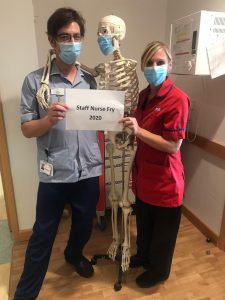 ntact with her husband and daughter who agreed all discharge plans. She had progressed with her mobility and was keen to get back home, once all plans had been co-ordinated there was a date set for her discharge. On the day of discharge, we were unable to contact the patients husband, so a welfare check was requested through the police and discharge plans put on hold. The police later arrived on the ward to deliver the news to the patient that her husband had died at home. Due to the patient’s advanced dementia she had difficulty in retaining this information and continued to request to return back home. She was unable to weigh up the risks of returning home alone which would make this discharge option unsafe.

On discussion with the patient’s daughter about how we proceed, she expressed that she would like her mum to come to live in a care home close to where she lives in the north of England. In cases like this, it is important to establish the individual’s mental capacity so we can ensure that decisions are made by the correct person, ideally the patient, or in their best interests. The mental capacity assessment showed that she did not have the capacity to make decisions pertaining to discharge plans but when discussing the discharge options with the patient, she expressed a desire to go and live near her daughter and became excited about seeing her. When organising the discharge for out of area, there were many barriers which delayed the discharge process, the main one being funding. It was my role to liaise between all parties and advocate for the patient, I ‘elegantly challenged’ the funding process and highlighted that it is not acceptable to keep her in hospital and she needs to be with her family so they can grieve and start a new chapter in their lives. The process took about three weeks to finalise. During this time, the patient became frustrated at being in hospital, which was completely understandable. To try and resolve her frustration, staff ensured that she spoke with her daughter daily and they took time to sit with her and talk over a cup of tea or go for a walk.

On the day of discharge, I got the patient ready for the long journey to her daughter and made sure that all discharge paperwork and medication were ready to go when the transport arrived. When talking with the patient, she was excited to be leaving the hospital and seeing her daughter. On her way off the ward, the patient held my hand and asked if I could go with her, I respectfully declined. Thinking of everything that she had been through during her time with us was emotional and it drove home the importance of advocating for patients to ensure that their care is tailored to their individual needs. For that patient, her admission to hospital was a completely life-changing experience, it was rewarding to see the patient looking forward to her new chapter with her daughter.