You are here: Home > CIPPM Co-Director Speaks at joint WIPO and University of Turin Event 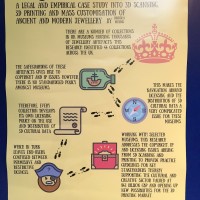 Prof. Dinusha Mendis, was invited to deliver a talk on her research into Intellectual Property and Emerging Technologies, with a focus on 3D printing.

Prof. Mendis spoke about the legal status surrounding 3D printing, with a particular focus on the funded research carried out for the UK Intellectual Property Office ( completed 2015) and the current AHRC funded project titled ‘Going for Gold’ exploring the intellectual property implications surrounding 3D scanning, 3D printing and mass customisation from the point of view of cultural and business sectors.

The event was organised with the kind financial support from the Government of Italy and was attended by academics, practitioners and officials from WIPO and ITCILO.